George Thomas Allenby was born in 1908 as son to Thomas Allenby and Kate Eliza Allenby. Served asAble Seaman and the function of Gunner at Royal Navy base H.M.S. President III. He was stationed aboard the merchant s.s. Pacific. The s.s. Pacific sailed with Convoy FS 33 from Sunderland on February 7th, 1943. The convoy was reported missing in heavy weather and a number of ships vanished. One of them was the s.s. Pacific.
The body of George Allenby was recovered form the North Sea and brought on land in the Netherlands. Although the headstone bears the date of February 9th, 1943 as date of death, which is the probable data of sinking of the s.s. Pacific, the graveyard register gives the date of February 23rd, 1943 as date of death. This probably is the date his body was recovered. He was buried on March 23rd, 1943. 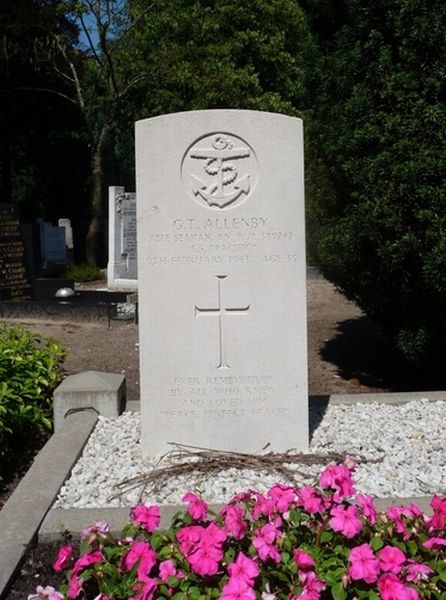