Recommendation:
"Dlifht Sergeant Winter is a keen and reliable W/Op (Air) who has shown exceptional ability in this capacity as a member of his crew on several operational flights.
On the night of the 1st February, after the aircraft in which he was flying had been badly damaged by enemy action, and was flying on two engines, he carried on with his duties, although his clothing was literally saturated with petrol, and petrol several inches deep was "swilling" around the floor of the aircraf in his position.
On the night of 8th February, 1945, the Squadron was required to supply a Conroller and W/T Link team for a spoof controlled attack on New Brandenburg. F/Sgt. Winter was detailed as Link 2, a duty which he able carried out. On the night of the 14th March, the Squadron was called upon at short notive to providea full W/T Link Team. F/Sgt. Winter being detailed as Link 1 for an attack on Lutkendorf. He again performed his duties with outstanding accuracy and efficiency, and the Squadron was congratulated by the Air Officer commanding 5 Group for its excellent controlling.
At all times F/Sgt. Winter has performed his duties conscientiously and his displayed coolness and courage in the face of danger, this gaining the complete confidence of his Captain and crew." 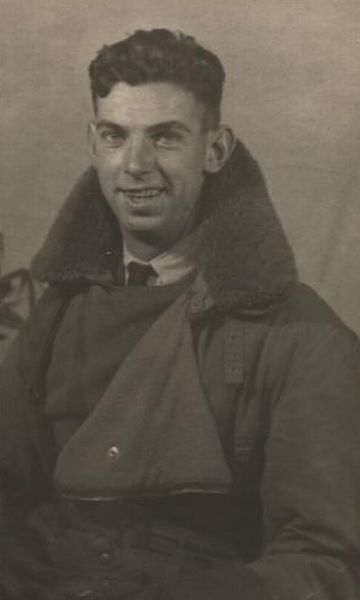