Citation:
"In Burma, on 2nd March, 1945, the Japanese were holding a strong position astride the road Kamye-Myingyan. Two Companies of the 15th Punjab Regiment carried out successfully a wide encircling movement and established themselves on some high ground about one and a half miles in the rear of this enemy position. As all water supply points were within the enemy position it was vital that he should be dislodged.
The attack on to the first objective was successful and one platoon was ordered to attack a village to the right. This platoon's attack, with the aid of tanks, advanced slowly under very heavy enemy fire. Naik Gian Singh was in command of the leading section.
The enemy were well concealed in foxholes along cactus hedges and Naik Gian Singh soon observed enemy some twenty yards ahead. Ordering his Light Machine Gunner to cover him, he, alone, rushed the enemy fox-holes, firing his Tommy Gun. He was met by a hail of fire and wounded in the arm. In spite of this he continued his advance alone, hurling grenades. He killed several Japanese including four in one of the enemy main weapon pits.
By this time a troop of tanks moved up in support of this platoon and came under fire from a cleverly concealed enemy antitank gun. Naik Gian Singh quickly saw the danger to the tanks and, ignoring the danger to himself and in spite of his wounds, again rushed forward, killed the crew and captured the gun single-handed. His section followed him and he then led them down a lane of cactus hedges, clearing all enemy positions which were being firmly held. Some twenty enemy bodies were found in this area, the majority of which fell to Naik Gian Singh and his section.
After this action, the Company reformed to take the enemy positions to the rear.
Naik Gian Singh was ordered to the Regimental Aid Post but, in spite of his wounds, requested permission to lead his section until the whole action had been completed. This was granted.
There is no doubt that these acts of supreme gallantry saved Naik Gian Singh's platoon many casualties and enabled the whole operation to be carried out successfully with severe losses to the enemy.

The magnificent gallantry of this Naik throughout, his devotion to duty and leadership, although wounded, could not have been surpassed. " 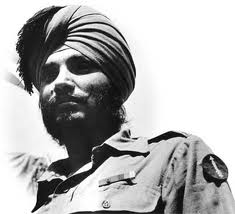