On 15 February, 1944 F/L Berry and crew took off in Lancaster ND363 PM-K at 18.11 from their base Elsham Wolds near Grimsby. On the way back from Berlin they were intercepted by a German night fighter. At 22.58 they were shot down by Heinz Schnaufer and crashed into the shallow waters of the Waddenzee, just east of Oost on the island of Texel. Two of the crew were never recovered.

Citation:
"This airman has completed many operational missions and has invariably pressed home - his attacks with great determination On one occasion, when attacking Kiel, his aircraft was hit and damaged by anti-aircraft fire Despite this, Sergeant Berry displayed great persistence and bombed his objective successfully On another occasion he displayed commendable skill and initiative during a flight to Turin In a recent attack on Essen, Sergeant Berry pressed home his attack with great spirit although his aircraft was damaged by opposing fire Throughout his operational career, this airman has set a fine example." 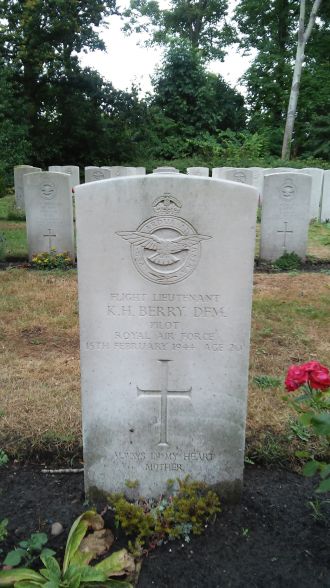