Rank: Sergeant. Killed in the outskirts of Berlin.

For repelling a German counter-attack in Michalow-Grabina, during which he destroyed a self propelled gun, two machine gun positions, two bunkers and two barricaded buildings.

For destroying three guns during fighting for a bridgehead on the Vistula river on 14 January 1945. Later, he destroyed two armoured vehicles and three trucks in an ambush near the village of Stromiec. 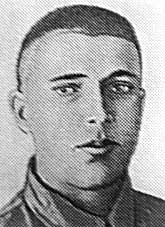