2 citations
"Officer whose calm bravery gives his men an absolute confidence and who testifies good leadership qualities during the fightings. The 31st of January 1944, remarkably made his platoon manoeuver while his company in the poursuit of an enemy was assaulted from all sides by fires in the forest of Somry, himself pointing a machine gun then a light mortar under an adjusted fire of the enemy, forcing the enemy to retreat on both flanks."

severely WIA to the shoulder 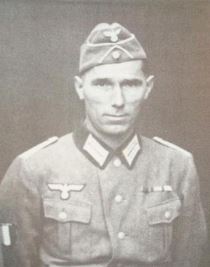