Lt. Tibbits was posthumously awarded the DSC for his part in Operation Chariot, the combined Royal Navy and Commando raid on the Normandy drydock at the French port of St Nazaire , March 28th 1942.

The plan was to ram the drydock gates using HMS Campbeltown , the bow being packed with explosives. Its destruction would deny the German battleship Tirpitz a base on the atlantic coast, and therefore prevent it from attacking allied convoys sailing to Britain.

Lt Nigel Tibbits was responsible for designing the bomb, calculating the amount of explosives required and where the explosives should be placed. On the run up to the drydock gates the vessel was under heavy fire, the helmsman was killed, the man who took over from him was killed almost immediately.

A Royal Engineer took the helm briefly, Lt Tibbits then took the helm as the Campbeltown made its final run to the target while still under heavy fire. He made a vital course correction as the ship was heading for the wrong target, it smashed into the drydock gate and the explosives in the hull were directly over the gate, just as Lt Tibbits had planned.

The commandos then proceeded to assault various installations in the dockyard while fighting the German troops. When the Campbeltown eventually exploded the drydock was destroyed, it was not repaired until 1947.

Lt Tibbits was killed while trying to get back to England on one of the escorting motor launches, his body was never recovered. He is commemorated on the Royal Navy memorial in Portsmouth.

The raid was a success but cost the lives of 168 men. 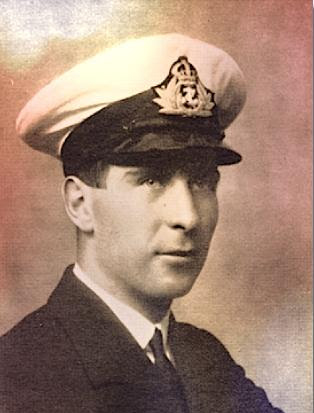