There's no information is available on the date of birth of Shri. Lingaraj Urs, (son of Shri Basavaraje Urs of Mysore).

After the successful operations by the British Forces in Haifa and Megiddo, the surviving forces of the Ottoman Yildirim Army Group, began fleeing from Judean Hills, towards Damascus to group afresh there. The chasing offensive was by Australian Mounted Division. On 25th October 1918, serious fighting broke out at Aleppo in Syrian area. This resulted in a loss of lives of thirteen brave soldiers of Mysaore Lancers, in which Lingaraj Urs was also one of them. His mortal remains are kept in CWGC Basra Memorial Panel 68. He was the son-in-law of Col. B. Chamaraje Urs, who was the Field Commander of Mysore Lancers in the Sinai/Palestine campaign.

The  names of all the 13 Mysore Lancers Warriors who sacrificed  their lives in the Aleppo War(Syria)  on 26  October 1918 are  displayed  at  CWGC  Basra Memorial  in Iraq. All on Panel 68.

Second Class to the Indian Order of Merit

"After Mysore Lancers landed in Suez Canal area, they were assigned the duty of guarding the Suez from the East Bank from the Ottoman and Germans who were regularly attacking this area. In October 1915, in the eastern parts of Kantarah area, Mysore Lancers saw 60 camel mounted Turkish troops, with a back up of 200 more, advancing. They were engaged, chased 7 miles, eastwards. The notorious Bedouin leader Rizkalla Salim, famed for most raids on the canal, was engaged in a hand to hand fight, and was killed by Jemadar A. Lingaraj Urs., and after Salim's death the attempts on the canal entirely ceased. For this bravery, Lingaraj Urs was awarded Indian Order of Merit (2nd Class)." 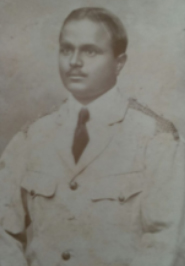