Robert was born on November 29 1924 in Peterborough Ontario, the son of Thomas Hendry (Scottish) and Luella Hendry nee Stewart of Peterborough. His sisters were Jean, Crystal and Katherine Hendry and his uncle was A.B. Hendry of Glasgow Scotland.

He was a hardware clerk and member of the Presbyterian Church and his sports were soccer and baseball.

He enlisted on November 16 1942 in Toronto and he went thereafter on September 1 1943 overseas to the UK.

Robert was killed in action on Thursday April 27 1944 age 19 due to a crash in the Oosterschelde before or after an attack on Essen in Germany. He washed up on July 26 1944 near Wissenkerke. The other fallen RAF Volunteer Reserve crew member was Sgt James. H. Gilbert age 19 who was buried on June 28 1946 then later at the Bergen op Zoom War Cemetery in grave 14-C-3 and he washed up on May 26 1944 near Westerschouwen and he was temporarily buried in Haamstede. The other fallen USAAF crew member 1/Lt F.S. Shove washed up on April 28 1944 near Wissenkerke and he was temporarily buried then there and he was later reburied at the American Cemetery in Margraten and thereafter reburied again in Connecticut USA. The other fallen and missed RCAF crew members and therefore mentioned at the Runnymede Memorial in England were: F/O/ Everett R. Rognan age 23 on panel 248, WO II Graham F. Butson age 27 on panel 254, W/O I John M. Potter 26 on panel 254 and P/O Douglas T. Greatrex age 20 on panel 250.

He served with the 408 Sqdn Royal Canadian Air Force. 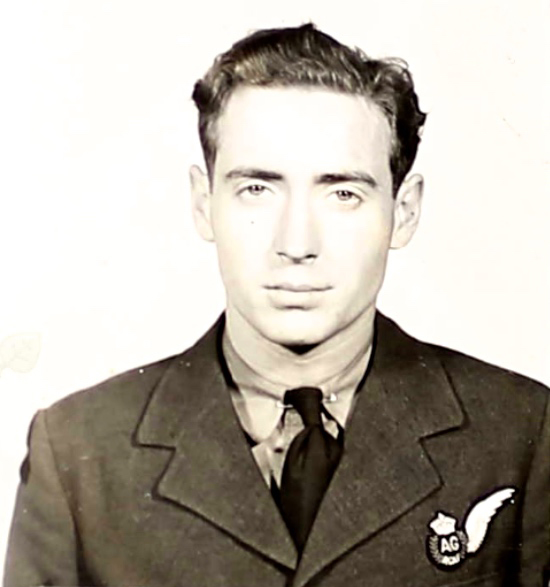