Memorial to the Defenders of Moscow 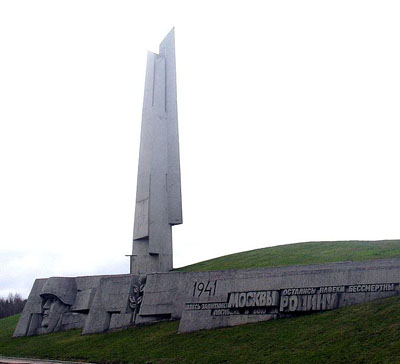 This memorial complex is dedicated to the Soviet defenders of Moscow, during the Battle of Moscow (2 October 1941 - 7 January 1942) and was built on the spot where the first Soviet soldiers were buried in a mass grave in the winter of 1941. The 42 meters high bayonet shaped concrete memorial symbolize the rifle, tank and cavalry divisions. It stands on a mass grave known as "Hill of Glory" which rises to a height of 27 meters.

The inscription on the concrete wall in the foreground reads:
"1941 Here the defenders of Moscow, fallen in battle for the Motherland, remain forever immortal."

Under the bronze wreath, at the entrance, rest the ashes of hundreds of Soviet soldiers and officers. The inscription on the wreath reads:
"Never will the Motherland forget her sons."