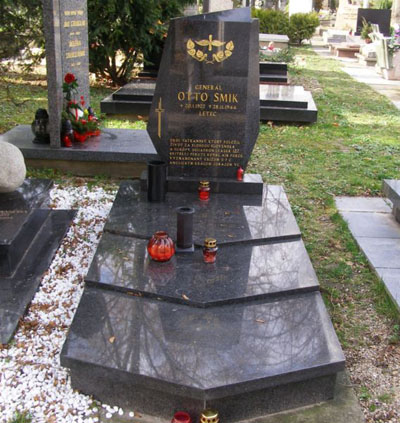 The Slávičie údolie cemetery of Bratislava contains the grave of Major General of the Air Force Otto Smik. He was one of the most successfully Slovakian pilots in service of the RAF during the Second World War. He escaped the newly formed First Slovakian Republicon 18 March 1940 and soon joined the RAF. Between 1940 and 1943, he shot down 9 enemy fighters and three V1 rockets and eventually became the commander of 127th British squadron. He crashed and died on 28 November 1944 near Zwolle (in the Netherlands), after been hit by German AA fire. He was posthumous promoted to Major General of the Air Force.