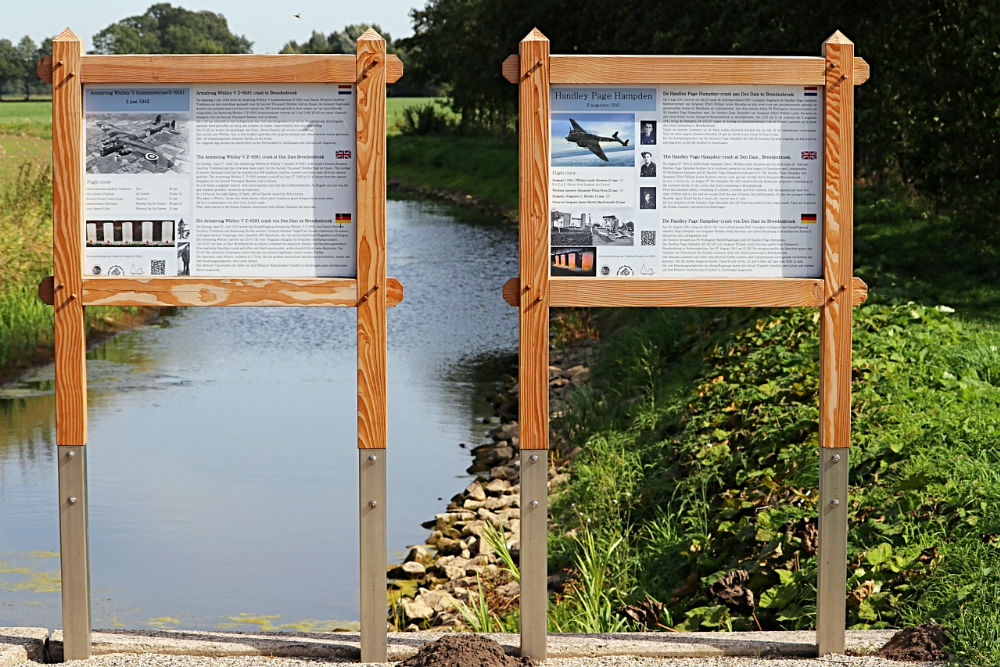 Commemorative signs in Breedenbroek near the Keizersbeek in memory of two crashes. It concerns the Handley Page Hampden crash on 6 August 1941 and the Armstrong Whitley V crash on 2 June 1942.

On the night of 1/2 June full moon with many planes flying to Germany. Masses of flares lit up the sky above Breedenbroek / Dinxperlo. At 1.40hrs an air fight with a lot of machine gun fire started over Breedenbroek. An English machine was hit and burst to pieces, probably from an explosion. At 01.48hrs the night fighter of Hptm booked. Alfred Haesler his first victory over a Whitley V over Dinxperlo / Breedenbroek.

The aircraft, which turned out to be the Whitley type, was broken into three pieces. These three pieces ended up at a great distance from each other. Two parts of the tailpiece and left wing lie on the territory of Dinxperlo, and two other pieces on the territory of Breedenbroek. Later that morning two more pilots were found at a distance of 1500 meters from the hull, which will be the total number of five crew members. Not much later, the Oberleutenant of the air base from Enschede arrived at the disaster site. He discussed the situation with Mr. Mayor and then drove by car to Breedenbroek for identification of the corpses. When this was done, the officer ordered the bodies to be transported to the cellar of Gendringen. The earthing will take place the next day at an even more specified time.

Handley Page Hampden AE 120 ZN
In the evening of August 5, 1941, 65 Wellingtons and 33 Hampdens departed from various airports in the direction of Germany for a joint attack on targets in Mannheim and Ludwigshafen. The Handley Page Hampden bomber AE 120 ZN of the 106th squadron departed from Coningsby airfield at 10:25 PM. New Zealand Sergeant William Leslie Knowles was the captain and pilot. Alexander Philip Price was involved in this flight as a wireless operator and airgunner. Shortly before the flight he received the Distinguished Flying Medal (DFM) *. The Hampden crew further consisted of observer sgt. J.M. MacILwraith and wo ag sgt. C. Rhodes. The attack on Mannheim and Ludwigshafen went exceptionally well and the reports reported Good Bombing Results Reported. Of the 65 Wellingtons and 33 Hampdens involved in these attacks, resp. 2 and 1 lost.
The Hampden of sgt. William Leslie Knowles and his crew ran into trouble above Dinxperlo / Breedenbroek and were hit by anti-aircraft guns. We will never know what happened in the bomber.

Some time later, the bodies of the two youngest children of the Lammers family, Hendrik (* 1929 Gendringen) and Gerda Johanna (* 1937 Gendringen), were found among the rubble of the house.