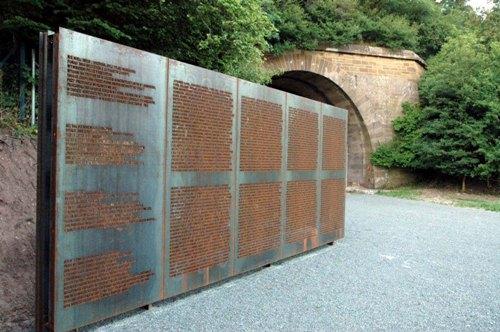 The old roadtunnel of Engelberg north of Leonberg, with two tubes with a length of 318 meters, was finished in 1938.

In 1944, the tunnel was finished and was used as an underground factory for the assembly of the Me 262. For this work, about 3000 inmates from Natzweiler-Struthof were brougt here. Of them, 374 died.

At the end of World War II the tunnels were blown up. In the following years they were repaired and the tunneld were used until 1999, then a wider tunnel came ready.

The old tunnels were closed. To commemorete the camp and the victims, a memorial was erected at the southern entrance of the west-tunnel. A small part of this tunnel is also enterable.