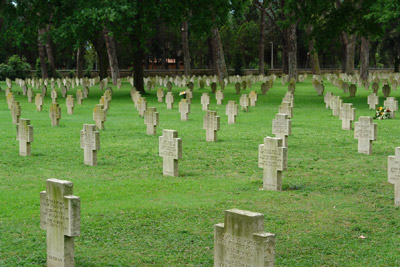 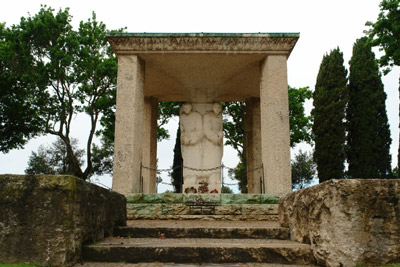 During the heavy fighting at the allied bridgehead of Anzio-Nettuno the Americans established a military cemetery (Kriegsgräberstätte) at the northern exit of the city of Nettuno, where they also buried the German dead. Early 1947 the American Cemetery Services reburied the 2.740 German dead in a piece of land near Pomezia, which had been made available free of charge by the Italian Government in December 1946.

The German War Graves Society reburied thereafter another 3.751 German dead that had been buried on several other cemeteries along the former bridgehead of Anzio-Nettuno. In the years between 1948 and 1955, the German War Graves Society reburied another 10.704 dead that were interred in the municipal graveyards of the cities of Rome, Latina, Salerno, Avellino, Frosinone, LAquila, Chieti, Sienna and Pistoia. After an agreement between the Italian and German governments of 22 December, 1955, finally another 10.228 deads were reburied. These were soldiers that had been buried in the provinces or cities of Ancona, Arrezzo, Ascoli, Grosseto, Latina, Livorno, Macerata, Napoli, Perugia, Pesaro, Rieti, Rome, Siena, Terni, Viterbo and Reggio di Calabria. In total 27.443 German soldiers found their last resting place in Pomezia.

From the entrance building a straight and paved walkway leads along the graves to the central memorial that has been raised above the graveyard. Four heavy pillars carry a canopy that has been ornamented on the lower side with a mosaic of colored pieces of stone. The column in the middle has been adorned with four life-sized figures that mourn about their fellow soldiers. The graves with their crosses out of natural stone, are surrounded by clusters of pine trees.