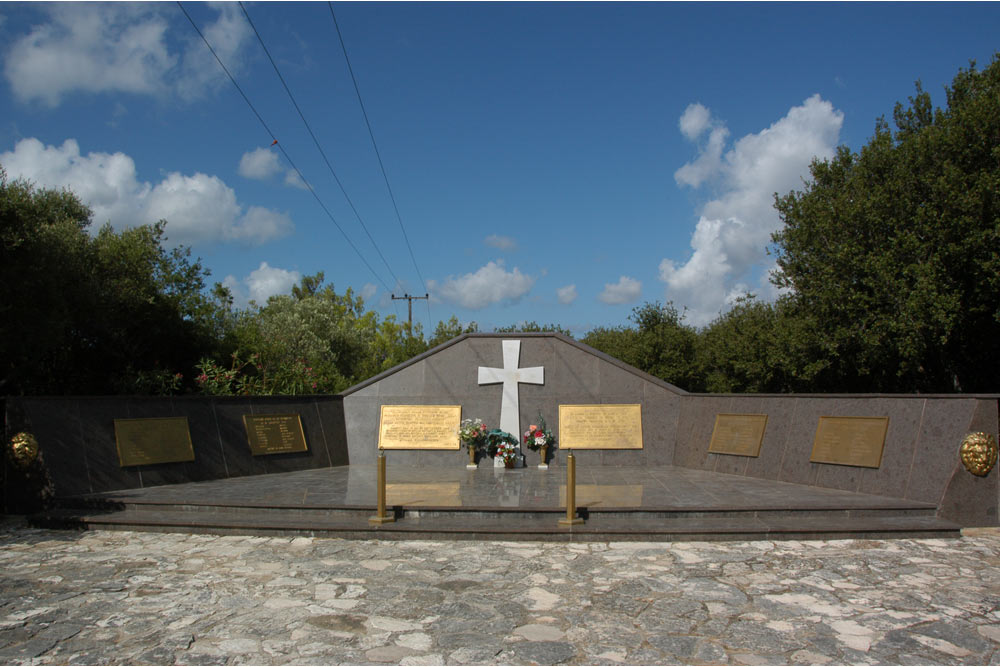 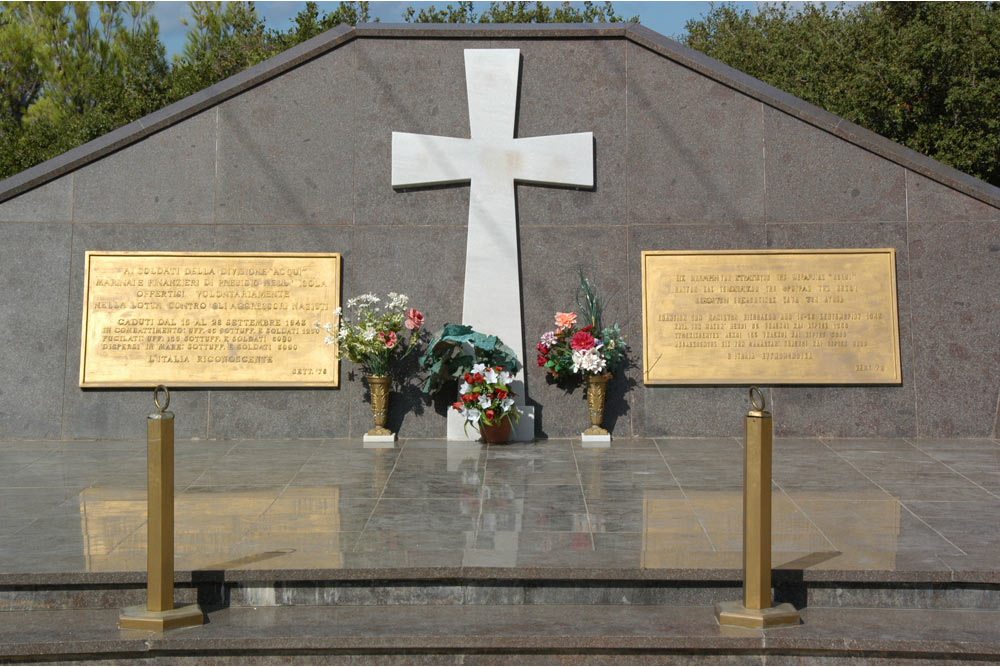 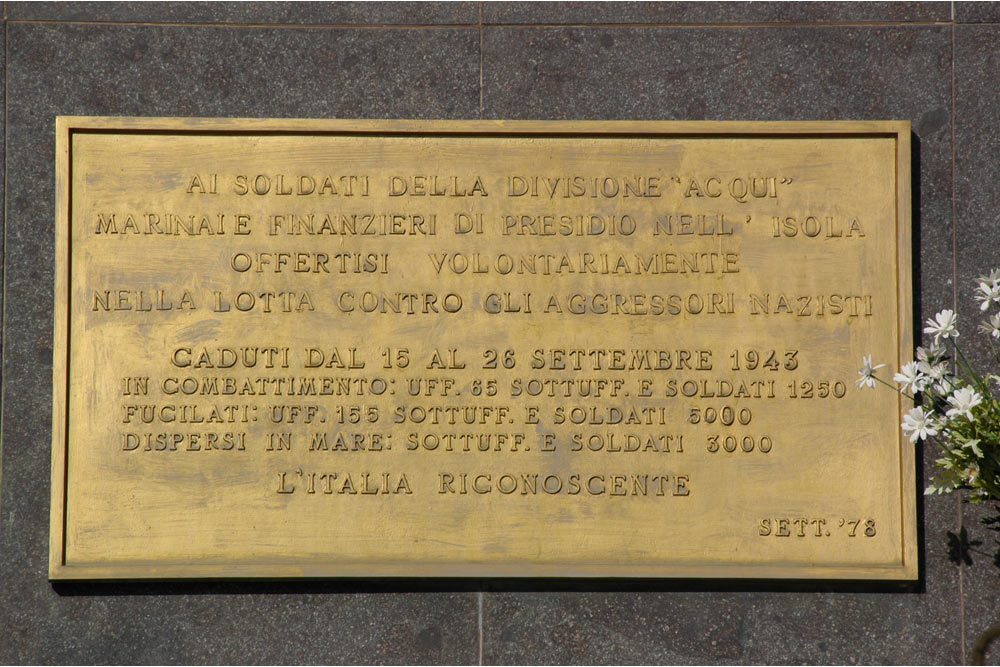 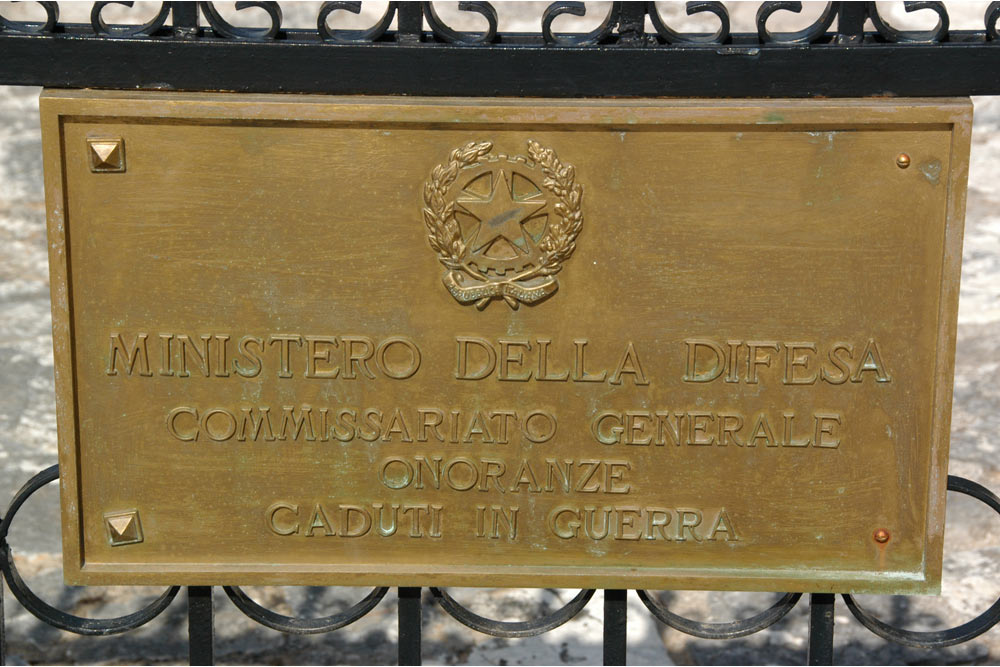 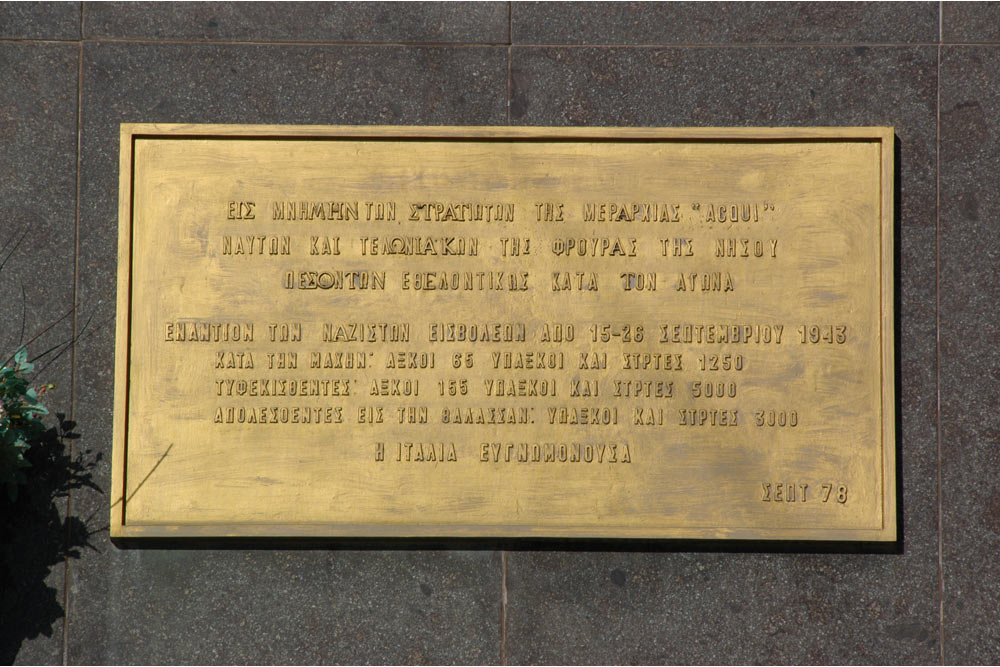 On the island of Kefalonia in Greece, this monument is erected. It commemorates the 9250 Italian soldiers who died during battles with the Germans, were executed or have died during transport to detention camps.

This is the sad story of what happened to the Italian Acqui Division in September 1943:

In April 1941 Greece was conquered by the Italians and the Germans, most of Greece fell since then under the control of the Italians. The Acqui Division was stationed on the island of Kefalonia in May 1943 and consisted of 11,500 soldiers and 525 officers. Led by the 52-year-old General Antonio Gandin.
During the Allied attack on Italy in 1943, an armistice was declared by the Italian government on September 8th 1943. All Italian soldiers stationed in Greece, were happy that for them the war was over. Nothing could be further from the truth. The Germans didn't accept the surrender of the Italians and immediately began to disarm the Italians in Greece.
Two garrisons were yet unhurt, these garrisons were led by Vecchiarelli and Gandin. These garrisons were placed under German command by the Italian government, to not immediately turn the Germans against Italy. Gandin was a pro-German General, he had fought for the Germans on the Eastern Front and he had even received an Iron Cross.
On September 11th he received the order from above not to cooperate with the Germans, he reported it to the Germans and got the choice to entirely join the Germans or to surrender.
Initially, after much discussion he decided to surrender to the Germans, this was also done by another Corfu garrison of the Acqui Division. These soldiers were all instantly transported to detention camps and could not return to Italy. This was unacceptable to Gardin's officers, the officers objected to the decision made by Gardin and decided to oppose the Germans.
On September 12th more Germans were sent to reinforce the island, the incoming ships were attacked with mortars led by the Italian officers. In response, the island was bombed by German aircraft and the 98th Gebirgsjäger Regiment under Major Harald von Hirschfeld was sent to the island. From Italian side there was no strengthening at the insistence of the Allies, they feared that Italian soldiers would join with their former ally, the Germans.
There was some help from the local Greek population, but the Italians were no resistance to the much better-equipped Germans, during the battles more then 1,300 Italians and 300 Germans were killed. The Italians decided after the big loss to surrender to the Germans.
Because the Acqui division after the ceasefire on September 8th 1943 had been placed under German command, they were tried as Germans. The Italians were seen as deserters. Desertion during wartime was high treason and was punishable by death. On September 18th Hitler ordered that the officers were to be executed for treason. On September 24th, Gardin and 136 other officers were executed, they were shot dead with machine guns in groups of a few men. The officers panicked because they knew what was happening, they screamed, cried or tried to escape. Chaplain Formato intervened, he saw to it that the Germans spared 37 officers. Following that decision, the Germans sent 20 Italians with rafts to sea to dump the dead, the Germans blew up the raft, due this act another 20 Italian soldiers were killed.

After the killings of the officers the soldiers were also tried as deserters and 5000 of them were executed. Many were shot through their heads while lying on the ground, others were shot by machine guns in quarries or against garden walls. During the executions one of the Italian soldiers was forced by the Germans to sing. The whole execution process lasted two hours. After the executions the bodies were burned or dumped in the sea. A lot of bodies rotted away where they were executed. Not all soldiers were shot, some 4,000 soldiers were put on transport to detention camps. Under German orders, the ships were not protected during the journey, this was why another 3,000 soldiers were killed, they hit mines on there journey.

Similar actions were also performed on other Greek islands, however, this remained by the executions of officers. The soldiers were put to work as forced laborers.
Major Harald von Hirschfeld was never tried for his part in the killings, he was killed during fighting at the Duklapas in Poland in 1945. Only the supreme commander of Hirschfeld, General Hubert Lanz, was sentenced to 12 years imprisonment for his share. He got a low sentence because he surreptitiously said the murders had not taken place ever, he received support from several German officers in this statement. Because there was no resistance from Italian side in this statement, this low sentence was pronounced. In 1964 and in 2002 they tried to reopen the process but there were no convictions. However, there are still approximately 300 ex-members of the Gebirgsjäger alive.

In the 50's about 3000 soldiers were reburied at the Italian war cemetery Bari in Italy.

In 1978 this monument was placed by the Italian government, before that time this war crime ignored by the Italians. Only after the release of the film "Captain Corelli's Mandolin" in 2001, the massacre really came to the attention in Italy and now there are regularly commemorations held for the victims that are now seen as the example of the Italian Resistance during World War II.

On the monument, different plaques are placed, all in Italian and Greek text.
On one of the plaques is this text:

At the place where the officers were shot hangs a plaque with the text: