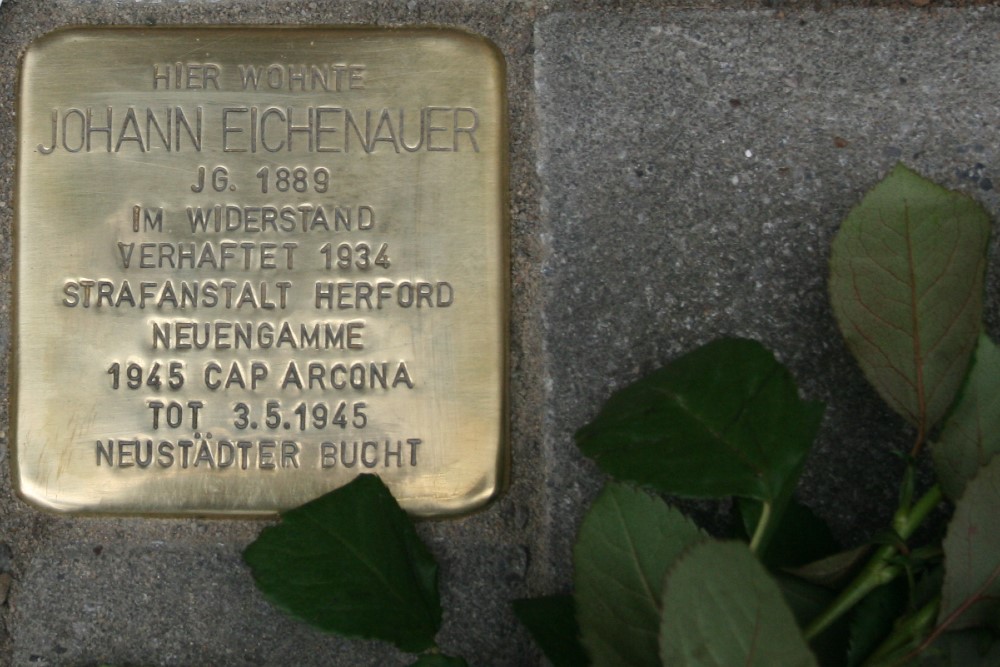 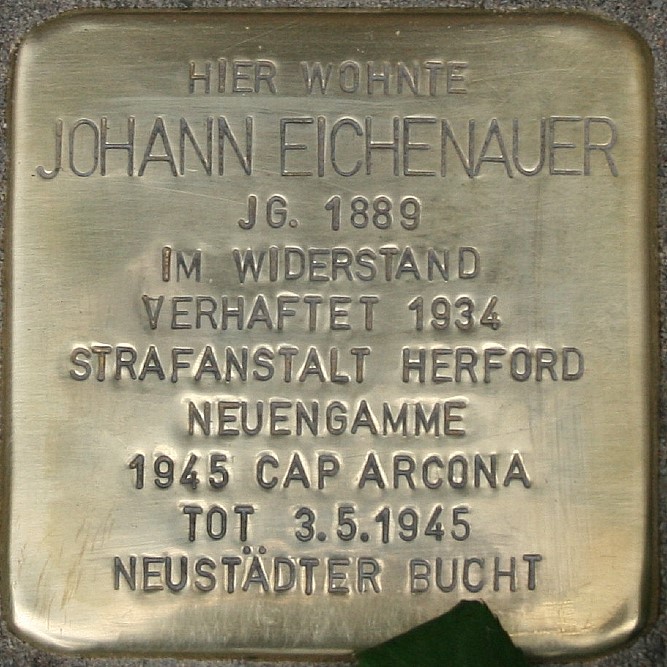 Johann Eichenauer served in World War I. Before the end of the war, he married Luise Waschulewski in 1916. They had two children  twin girls born in March 1919. Johann returned from the war with left-leaning politics, and he became a communist.

Shortly after the Nazis came to power, Johann and his family began to be persecuted. He was arrested in 1934; his teeth were knocked out while he was in custody, and in November he was sentenced to 27 months in prison. He served his sentence in Herford Penitentiary where he was again badly treated. After his release, he returned to Horst and found work at the Zeche Nordstern.

Then on 17 February 1944, Gelsenkirchen members of the resistance group he was part of  Zielasko  were arrested and taken first to Frankfurt, then to Amberg in Bavaria, where they were tried. Although Johann Eichenauer was found not guilty, he was not released. He was taken back to Gelsenkirchen prison, then to the Lahde "Labor Education Camp" near Petershagen. A daughter visited him there.

Johann Eichenhauer became seriously ill. He suffered from hunger edema and injuries sustained in an air raid on a train station where the camp inmates had to do forced labor.

He was then transferred to the Neuengamme concentration camp east of Hamburg. When British troops approached in April 1945, the Neuengamme was "evacuated" by the SS. Prisoners were transported by freight train to Lübeck, where most of the prisoners were loaded onto ships anchored in Lübeck Bay off Neustadt. The Cap Arcona, which was virtually unable to maneuver, and several other ships became floating concentration camps, which were strategically located among war ships. The concentration camp ships were overcrowded, and there was no drinking water or food for the prisoners.

On 3 May 1945, the British -- wanting to prevent the escape to Denmark of SS members -- bombed the ships in the bay. Some prisoners who survived the bombing were shot by Germans. Over 7,000 concentration camp prisoners were killed, including Johann Eichenauer, who was on the Cap Arcona. Four days later, the Germans signed an unconditional surrender of all German forces to the Allies.