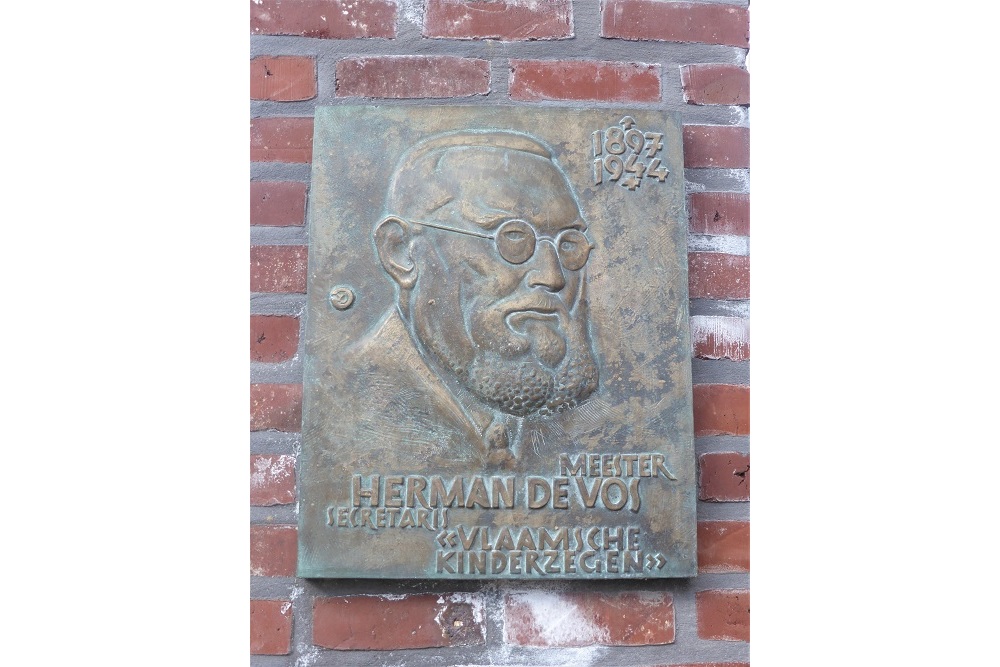 A plaque hangs on the wall of the cemetery:
1897 - 1944
Master HERMAN DE VOS
Secretary "Vlaamsche Kinderzegen"

Herman De Vos was a teacher at the Sint Maarten Institute in Aalst. He was married and had eleven children. He became one of the founders, mainstays and secretary general of it
"Vlaamsche Kinderzegen", a Flemish nationalist family organization.
Meester De Vos was someone who actively worked for his fellow man. That's how he was
district leader of the Organization of Self-Defense and secretary of the local chapter of Winterhulp. Various local personalities supported this organization, which tried to alleviate the dire situation of the population and of the children during the occupation through food distribution. In this way, the students could enjoy vitamins, soup, fish or bread during playtime.

Herman De Vos was a convinced Catholic but also a fervent Flamingant
He became an active member of the Flemish National Union (VNV), but he resigned in 1942 out of dissatisfaction with the course of events. The VNV had embarked on the path of collaboration in order to realize the Flemish aspirations with German support, but was increasingly drawn into the Nazi swamp
Immediately after the Liberation on September 3, 1944 he was arrested by the Resistance and imprisoned in "de Pupillen" on the Graanmarkt because of his membership of the VNV and therefore collaboration with the occupier. From there he was transferred to the prison of Dendermonde, where he was interrogated by attorney Rommel. However, he considered his guilt too small and therefore released him on September 12, 1944.
That acquittal was not to the liking of some resistance fighters who found the judicial authorities too lax and wanted to take the law into their own hands. They accused him of acting for profit and of reporting 2 resistance members.
In the night of September 13, a group of opponents (the so-called Flying White Brigade) rang his house. They took Herman De Vos with them on the pretext that some clarifications still needed to be provided to the local authorities. However, they took him to Haaltert. The next day his body was found, pierced with bullets, on the cemetery wall of Haaltert.
Originally, the Flying Brigade had someone else in mind, but because of his absence, the choice fell on Herman De Vos.
Some time after the murder of De Vos, all the perpetrators, members of the Flying Brigade, were arrested. The case went to the Assize Court in 1948.