Commemorative Plaque for the Magistracy 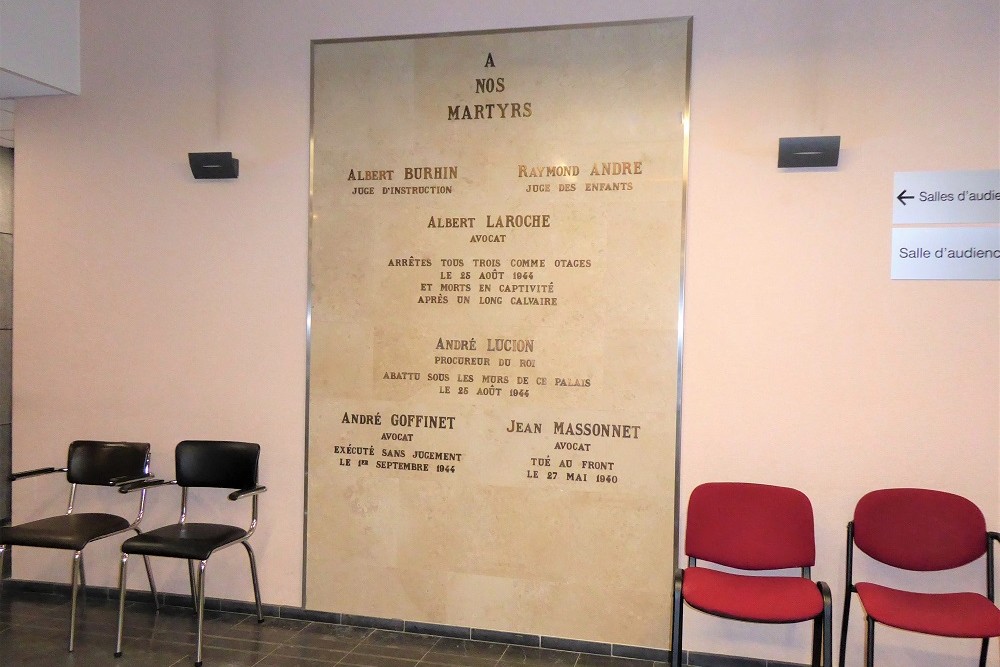 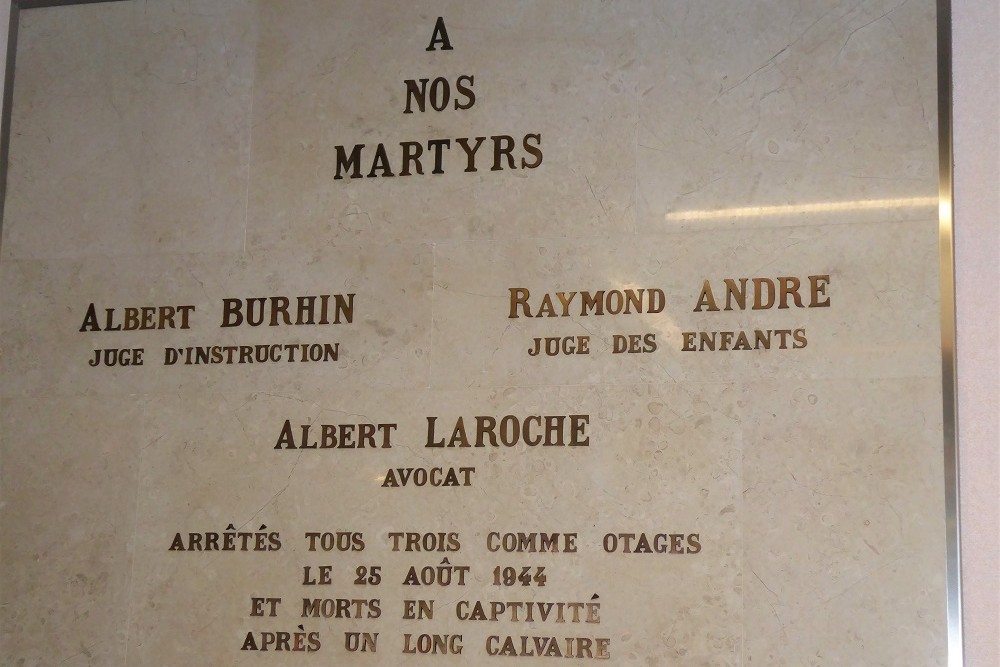 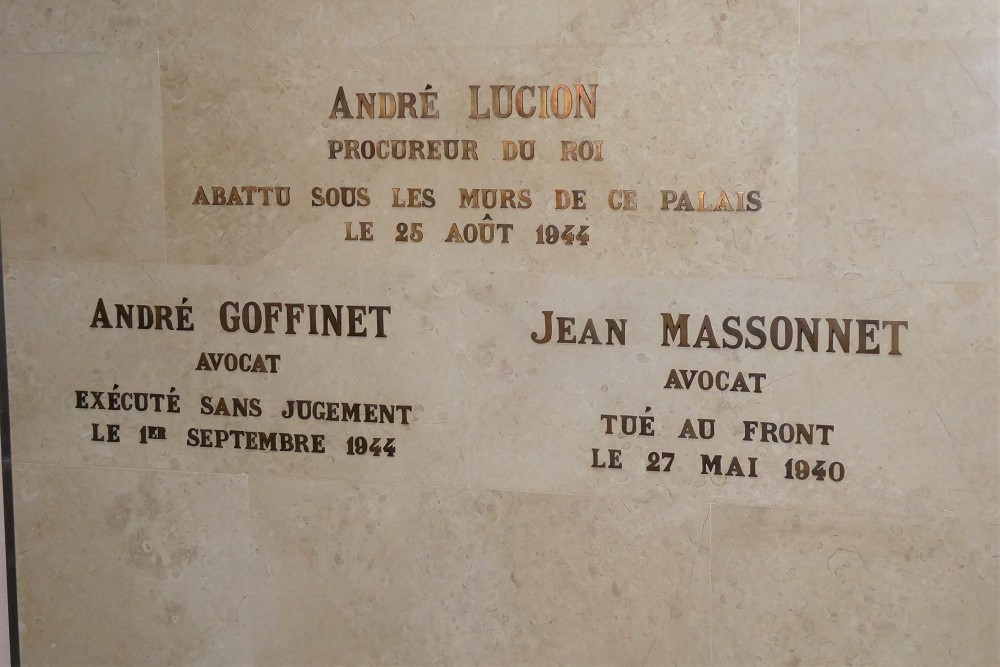 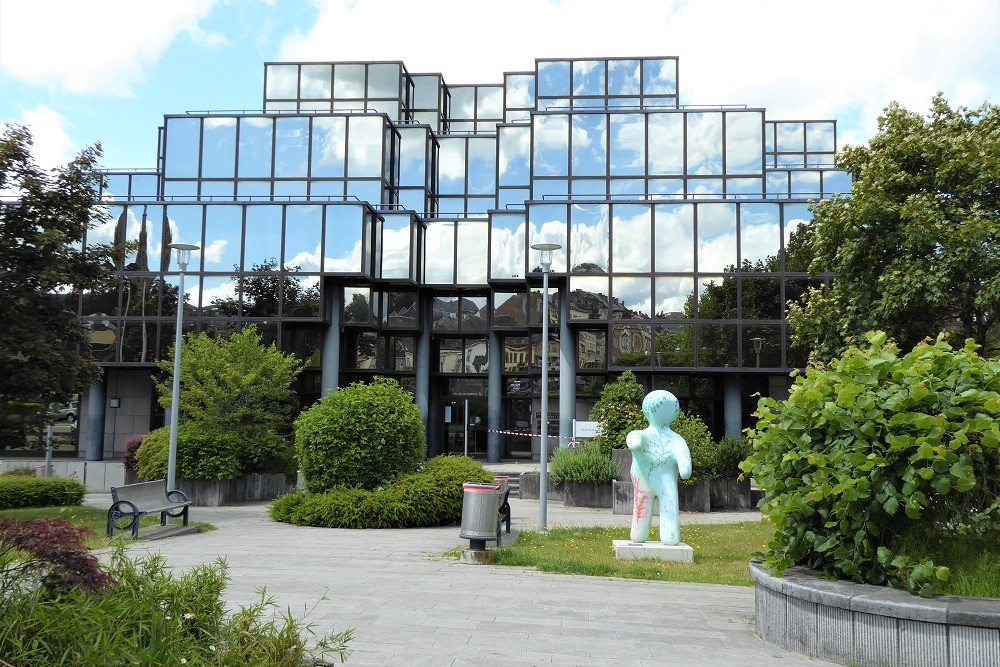 In the new Palace of Justice hangs a memorial plaque for several magistrates and lawyers, victims of the Second World War.

On the night of August 24, 1944, homemade bombs explode in Arlon in front of the houses of two notorious collaborators on Marché-aux-Légumes and Rue de Virton.
The damage is small, but the panic is great.
The Germans, still masters of Arlon, hold a crisis meeting around midnight in the Kommandantur (Provincial Palace) with all services.
That same night, dozens of suspects are arrested and taken to the Hotel du Nord (Feldgendarmerie) or the Kommandantur.
But the Gestapo is determined to immediately liquidate several suspects, including André Lucion.
The drama continues throughout the day. Hostages are arbitrarily arrested on the street and locked up in jail. Most are later deported to Germany.

On the memorial plaque "To our martyrs" are 6 names listed.
Albert BURHIN, investigating judge,
Raymond ANDRE, Juvenile Judge,
Albert LAROCHE, lawyer.
All three were arrested on August 25, 1944. In the first half of 1945 they died as prisoners of war in the Neuengamme camp after a long agony.
André LUCION, Public Prosecutor.
He was shot on 25 August 1944 on the wall of the old courthouse on Leopoldplein.
André GOFFINET, lawyer.
He was arrested on July 27, 1944 as a member of the resistance. He was executed without trial by the Gestapo in Metzert on September 1, 1944.
Jean MASSONNET, lawyer.
Sublieutenant 4th Ardennes fighters 10th Company
Died on May 27, 1940 at the Molenhoek in Gottem at the Battle of the Lys. He was 29 years old.