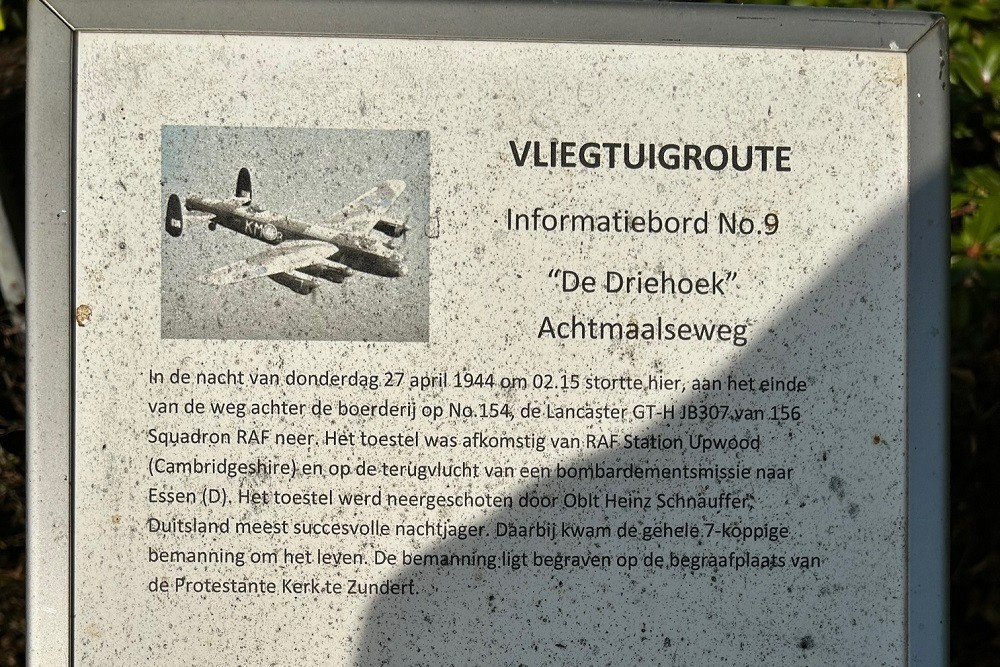 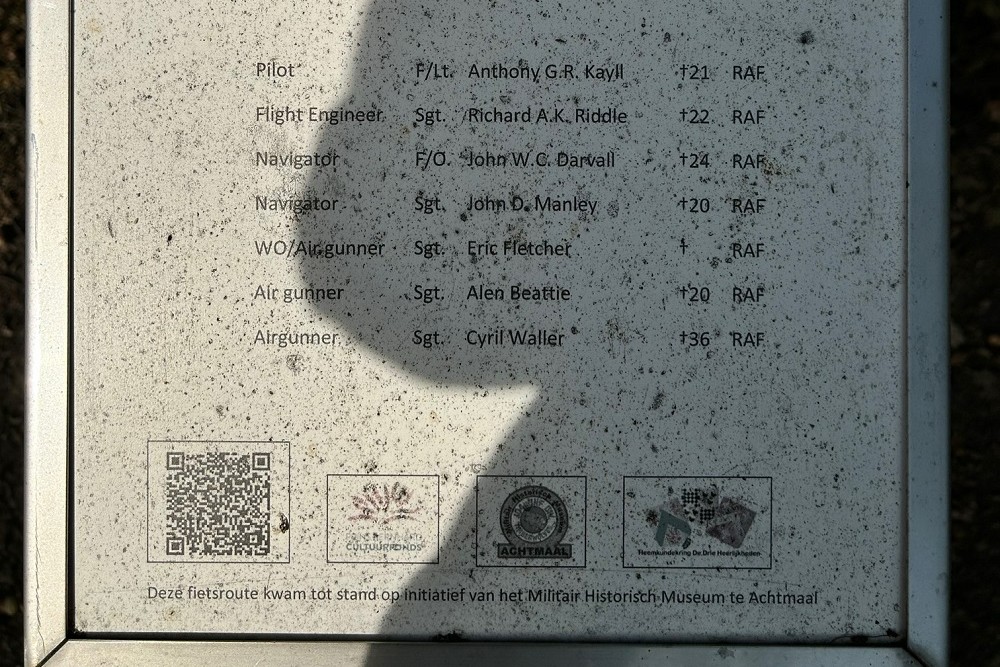 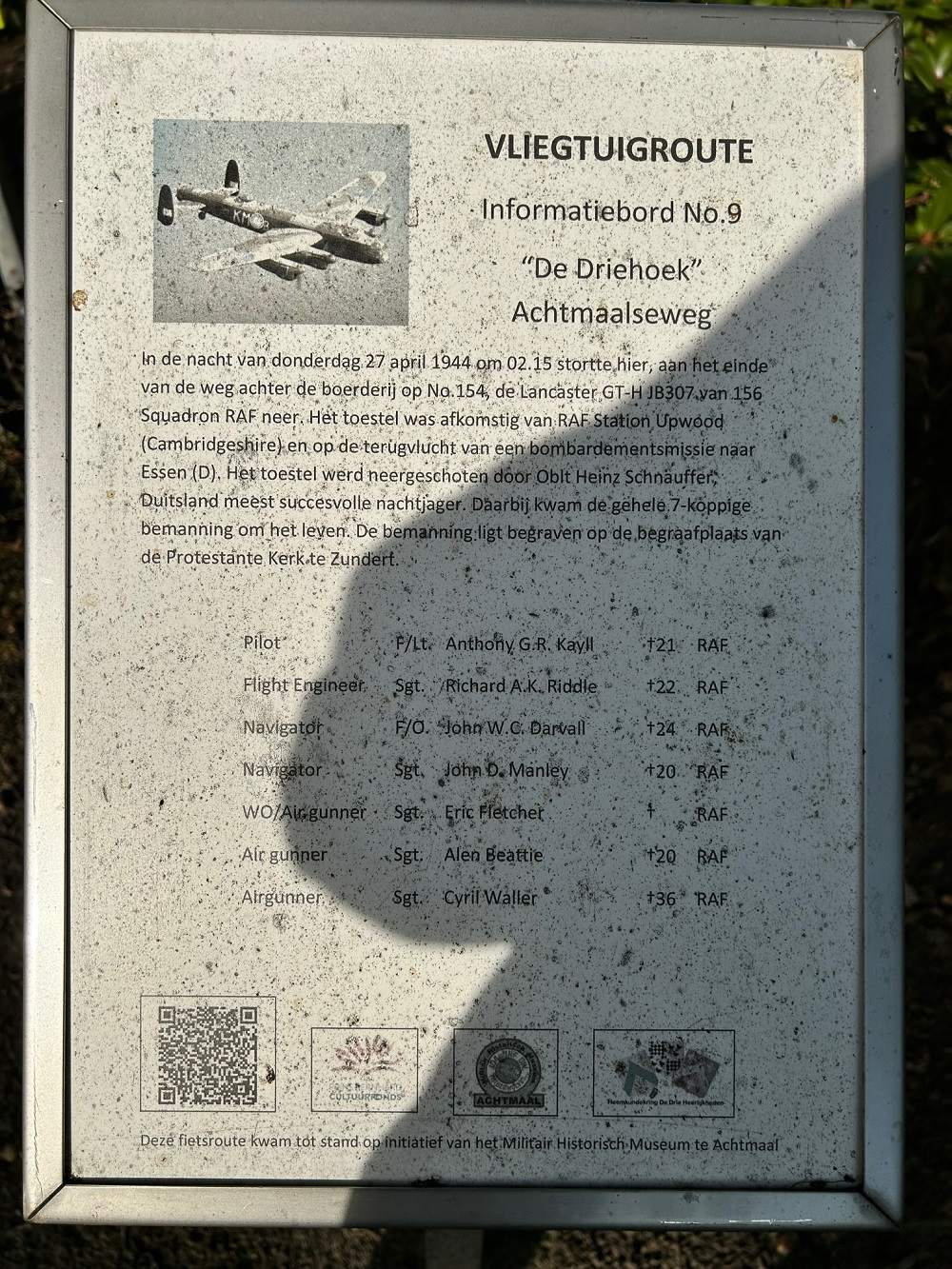 Zundert (Driehoek) 27 April 1944 Lancaster Mk III JB307 GT-H
On Thursday, April 27, 1944, the Lancaster JB307 GT-H of No. 156 Squadron RAF (RAF Station Upwood Cambridgeshire) on the return flight from a bombing mission shot down by night fighter pilot and Ace Oberst Leutnant Heinz Schnaufer. The Lancaster crashed at 02.05 in the hamlet of Driehoek, near the farm of the Brosens family at 154 Achtmaalseweg. The entire crew was killed.

The Lancaster took off at 23:13 on Wednesday, April 26, and was part of an attack fleet of 493 aircraft: 342 Lancasters, 133 Halifaxes and 18 Mosquitos. The target of the bombing mission was the Krupp factories in Essen in the Ruhr area. The bombing report stated that the attack was accurate due to the Pathfinders' good target marking. However, on the way back, "the ghost of Sint-Truiden" (St. Trond Belgium) struck; night fighter pilot Oberstleutnant Heinz Schnaufer of II/NJG 1. He scored his 58th victory of the 121 he will eventually achieve. That night he shot down another Lancaster.

Members of the Zundert first aid took care of the recovery and removed seven bodies from the aircraft. Only Sgt. Beattie was completely unharmed. The other six were completely charred. From Sgt. Riddle and F/O. Darvall, they found an ID. Also found was a large signet ring with the inscription C.W, presumably Cyril Waller. There were also pieces of the plane in the field of the Oostvogels family. They had to take those of the Germans to the road themselves. Jaan Oostvogels found another bundle of banknotes (escape money).
The entire crew is buried in the Protestant cemetery in Zundert.

On February 21, 1945, Schnaufer scored his greatest success: in the first hours of that day he shot down two Lancasters, in the evening another seven Lancasters within nineteen minutes. Schnaufer survived the war and was captured. The English brought his Messerschmitt Bf 110 G-4/U 8 to England and in September 1945, for an exhibition of enemy aircraft, placed it in Hyde Park with a sign: this Messerschmitt was flown by the best night fighter in the world: Heinz Wolfgang Schnaufer. Schnaufer shot down the most bombers during the war as a night fighter pilot. Schnaufer died on July 15, 1950 as a result of a road accident in France. He is buried in his hometown of Calw.