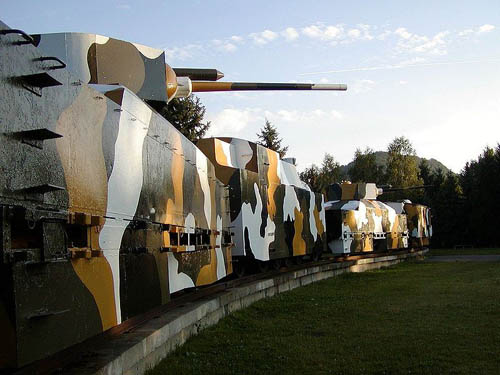 This armoured train is standing at the castle of Zvolen. The train was ready for use on 25 September 1944 and participated in the Slowakian National Uprising (29 August - 28 October 1944). The crew consisted of 37 Slowakian soldiers. "Hurban" operated in the Brezno  Červená Skala area against the 18. SS-Freiwilligen-Panzergrenadier-Division "Horst Wessel" and from October 23  24 1944, it participated in the the fighting for the Hron river. Despite suffering a damaged engine, it repulsed all German attacks. It was pulled to Harmanec, where it was abandoned in a railway tunnel. The crew resumed their struggle against the Germans as a partisan detachment.