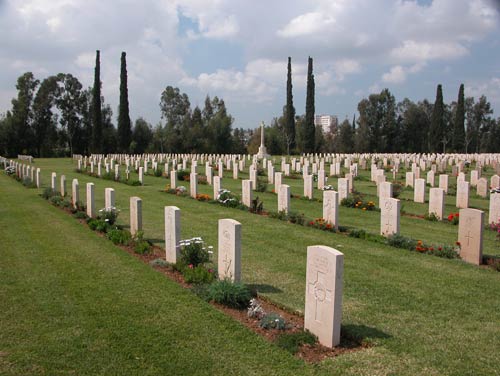 The cemetery dates from the First World War, when Ramleh (now Ramla) was occupied by the 1st Australian Light Horse Brigade on 1 November 1917. Field Ambulances and later Casualty Clearing Stations, were posted at Ramleh and Lydda from December 1917 onwards. The cemetery was begun by the medical units, but some graves were brought in later from the battlefields and from Latron, Sarona and Wilhema Military and Indian Cemeteries. During the Second World War, this cemetery was used by the Ramla Royal Air Force Station and by various Commonwealth hospitals posted in turn to the area for varying periods.

RAMLEH WAR CEMETERY contains 3,300 Commonwealth burials of the First World War, 964 of them unidentified. Second World War burials number 1,168. There are also 891 war graves of other nationalities from both wars and 525 non-war burials, many from the RAF and garrison stations that were at Ramleh in the inter war years and until the end of the British Mandate in Palestine in 1948.