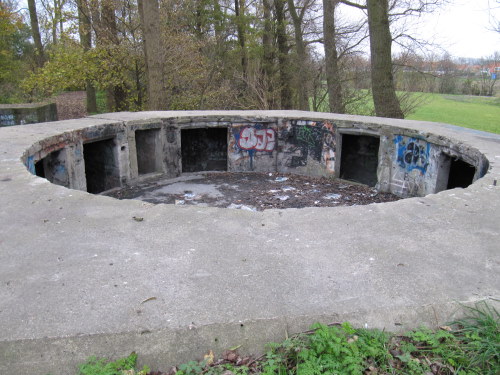 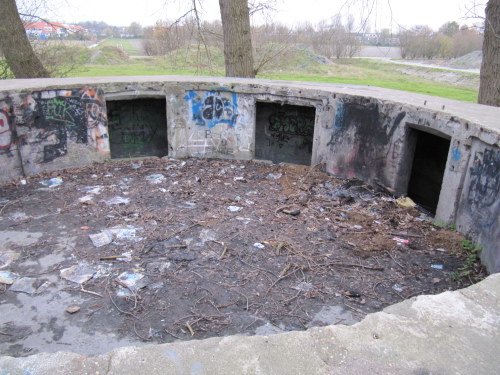 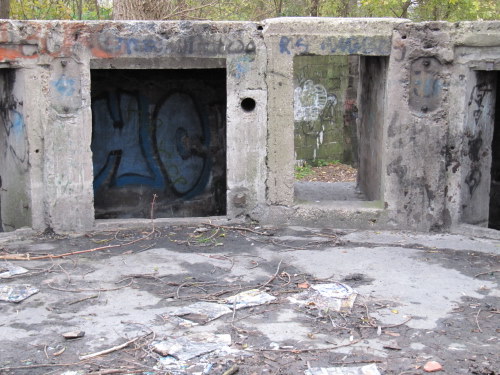 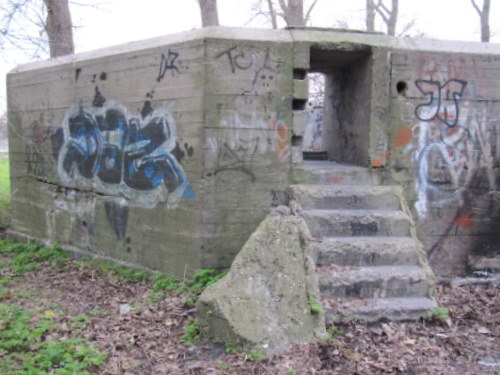 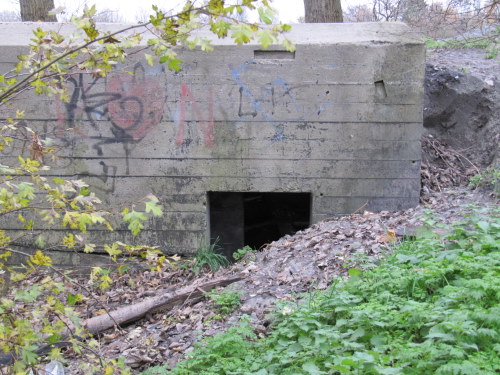 Hidden in a small forest on the Vrijburgstraat just north of West-Souburg are the remains of an anti-aircraft battery "Batterie Nord". After the conquest of the Netherlands in 1940 by the Germans, an anti-aircraft battery was placed to the east of the Buitenhaven in Vlissingen to repel air attacks. Very soon afterwards it was replaced by two anti-aircraft batteries, one in the seawall to the east and one to the west of Vlissingen. This soon turned out to be insufficient and in the following year a heavy anti-aircraft battery was set up at West-Souburg and a little later also at Breskens. Each battery was given the name of the direction it had in relation to Vlissingen. Thus the position at West-Souburg was called "Batterie Nord". The four heavy anti-aircraft batteries were each equipped with four pieces of 10.5 cm S.K.C / 32. Like the three other heavy Flak batteries around Vlissingen, the anti-aircraft guns were mounted in thin steel domes. The domes provided protection against the elements and falling shards, but they could not withstand a direct hit from a heavy grenade or bomb. On March 31, 1944, this weakness was pointed out during an inspection by the commander of the 1st Army. The answer was that no more ammunition bunkers were allowed to be built by order of Rommel. As a result, all functions of the battery remained under the protection of 30 cm of reinforced concrete. They were on VF works of the Fla 14 type. A number of these VF works are now covered with earth.

In the middle of the battery is a bunker, probably built for the power supply. This and the two bunkers of the Fla 14a type are easily accessible and in reasonable condition. It was a static gun originally designed for use on ships. With these then modern cannons a powerful defense of the airspace above Vlissingen was created; defensive against direct attacks and offensive against air convoys that had their approach route over Vlissingen. The German navy considered this protection necessary because the ports, the shipyard 'De Schelde' and the airfield (which was closed in 1941) had an important strategic and economic value. In retrospect, this does not appear to be wrong when it is concluded that Vlissingen is one of the most bombed cities in the Netherlands. Air raids that initially seemed to determine the fate of Vlissingen, but ultimately brought about destruction for the whole of Walcheren, when the dikes at Westkapelle, Vlissingen, Veere and Ritthem were bombed in the autumn of 1944. It was these anti-aircraft batteries that were to repel the air raids. When the Allies approached Walcheren in October 1944, the anti-aircraft batteries came to the attention of the Allies due to the increased number of air strikes over Walcheren and because they hindered the Canadian advance. Throughout October 1944, targeted successful attacks were carried out against these batteries and they were all disabled. The first problems encountered by the "Batterie Nord" were not caused by air raids on the position itself, but by the bombardment of 3 October 1944 on the seawall at Westkapelle. The local naval authorities foresaw that the emerging water would eventually cause problems for the position. It was considered advisable to move the entire battery to Veere. When the Nolledijk in Vlissingen was bombed, the decision about this relocation became acute. The commanding admiral in the Netherlands, who was based in Utrecht, however, believed that the guns should remain where they were. The entire position had to be surrounded by a dike. If this turned out to be possible, given the closed nature of the battery, the openings between the bunkers could be closed. He also believed that groundwater ingress could be stopped by adding an extra layer of cement to the floors. At Walcheren people thought differently. The setup looked like a stranded ship surrounded by seawater without any possibility to camouflage anything and so the battery became a target for Allied air raids against which the military could not protect themselves.

The situation of "Batterie Nord" was made clear to an agent of the commanding admiral in the Netherlands when he came to Walcheren in the period from 22 to 25 October. A dike was laid around the entire scaffolding and around the bunkers separately. Aggregates were first set up higher in the bunker and eventually placed on the roof. On October 18, the battery was completely surrounded by water. The radar for the fire control had already fallen prey to the water and a light anti-aircraft gun was threatening to follow. A day later accommodating soldiers had become impossible due to groundwater penetration. Only in alarm situations were the top of the three-high bunk beds slept. The men and kitchen were housed on the top floors of the houses on Kerklaan. To get here, a 700 meter long and 2 meter high walkway was constructed from the battery to West-Souburg. On October 30, part of this was destroyed in an air raid. Because on October 10 by the "Batterie Nord" support fire was given for the defenders of West Zeeuws- Vlaanderen, the battery was attacked by fighter planes. Compared to the other three anti-aircraft positions, "Nord" remained ready for fire the longest. The last deployable gun was put out of service the day before the attack on Walcheren, October 31, because three tons of liquid pitch were thrown into the air when a bomb hit and the contents ended up on this piece of gun. Due to cleaning work, the weapon was out of action for 24 hours. On November 1, fire was opened with a cannon on the landing beach of Vlissingen. A day later, the battery was permanently out of use. The occupation joined the army and was deployed to defend the canal bridge at Souburg.
In the First World War, the aircraft was already a serious air weapon against which new weapons had to be developed. These were the anti-aircraft guns, or anti-aircraft guns, that also took part in the history of Zeeland in World War II. What is so special there in that bush? Apart from the ruin in the wood on the Vrijburgstraat, no remains of the all-important air war can be found on Walcheren. During the war, the rocket was born, which sent these kinds of concrete installations to the realm of palisades and bastions. Missiles under the name V1 and V2 became the new weapon. A story that has been recovered by private individuals from dusty archives all over Europe. Most of the remains of the former "Batterie Nord" can be found here on the Vrijburgstraat. Some were destroyed by war damage, others by post-war demolition. What remains are two 7-angled gun emplacements which are typical of the architecture within the fortifications of the German navy. One of these has been damaged, possibly due to war violence. There is a shelter between these two yards. This was probably built to a local design, which is also easy to see in its less sophisticated design, which gives it a somewhat unfinished appearance.

Text on the first information board:
During the Second World War (1940-1945), Vlissingen was expanded with many hundreds of bunkers and barriers as part of the Atlantic Wall. A line of defense stretching from the North Cape in Norway to the French-Spanish border at the Bay of Biscay. The Atlantic Wall was to prevent an Allied invasion of the occupied western European coast. An important part of the defense of Vlissingen was the anti-aircraft artillery, which was deployed in four medium batteries around the Scheldt city. The important ports and the shipyard "de Schelde" required this air defense and made Vlissingen one of the most bombed cities in the Netherlands.

In this forest are the remains of the northern anti-aircraft battery of Vlissingen. The restoration and preservation of the bunker complex is a collaboration between the Bunker Preservation Foundation, the Zeeland Landscape Management Foundation and the Municipality of Vlissingen.
You are welcome. Entering the bunker (s) is at your own risk.

Text on the second information board:
The Vrijburg battery.
These bunker remains are the remains of the northern anti-aircraft battery of Vlissingen (Marineflakbatterie Nord), armed with four 10.5 cm anti-aircraft guns. The fire control for this gun was provided by a so-called "Leitstand", which was centrally located in the battery. The position of the enemy aircraft was calculated here with the help of rangefinders and angle scopes. Several shelters have been built spread over the battery station to house the gun control and the storage of the ammunition.

The battery as a monument: After the war, some of the bunkers were demolished and buried underground. Only two gun emplacements and a personnel bunker remained visible. In 2000, the Bunker Preservation Foundation received an incentive prize from the Zeeland Landscape Management Foundation. In collaboration with the municipality of Vlissingen, a plan was drawn up for the preservation and restoration of the bunker complex. Culture, history, nature and recreation go together in this. For example, the staff shelter now offers shelter to hibernating bats such as the long-eared, water and beard bat. In the autumn of 2002, the battery and the surrounding forest were cleaned up and made accessible to the public. The battery is now a monument to the air war above Vlissingen, which cost so many victims on the ground.

The battery and the liberation: In November 1944 the Allies landed on the Walcheren coast. The aim was to liberate the island and to facilitate the Allied convoy shipping to Antwerp. To weaken the German defenses beforehand, the island was flooded by a bombing raid on the dikes. A dike was constructed to protect the Vrijburg battery against the rising water. The bunkers present were partially bricked up and connected to each other via scaffolding. After a number of heavy bombardments, most of the guns were disabled. One of the positions for the 10.5 guns was completely destroyed by a direct hit. After these attacks, the battery no longer played a real role in the further battle.
You are welcome. Entering the objects at your own risk.