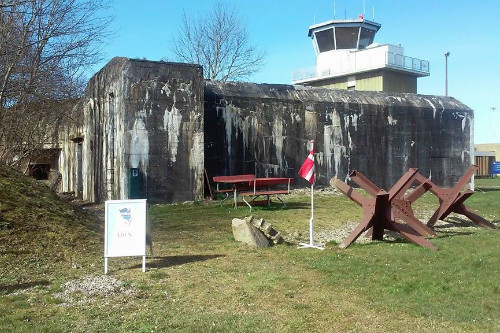 One of the large command bunkers at Odense Airport is now housing the museum, concentrated on the German occupation of Denmark.
The museum, formerly known as Historic Centre Beldringe, opened in 1995 under very primitive conditions. The bunker could be seen as the German Wehrmacht left it in 1945. Electricity was established the next year and a exhibition dealing with air battle over Funen and the civilian readiness of action during the war.

The exhibitions have changed during the last couple of years - Several rooms in the bunker have been brought back to the original state. The crew room is furnished with the original bunks, cupboards filled with the soldier's personal items.

Other rooms are dealing with the air battles over Funen - For example about a crash at Bellinge near Odense, a Short Stirling crash at Gals Klint at Middelfart and the crash of a Junkers Ju88 at Hoejme south of Odense.

In 2003 they opened another bunker for the public. It's a bunker of the same type as the museum bunker. Here it's possible for the public to explore a bunker. The area is filled with barricades and trenches, established after German receipt.