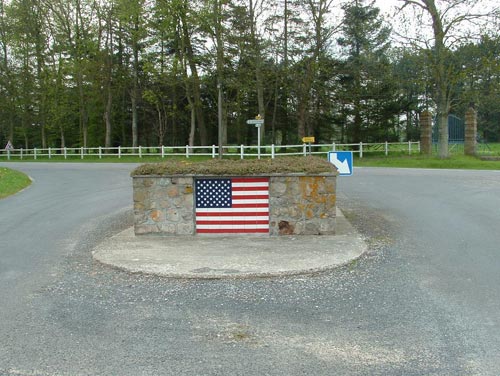 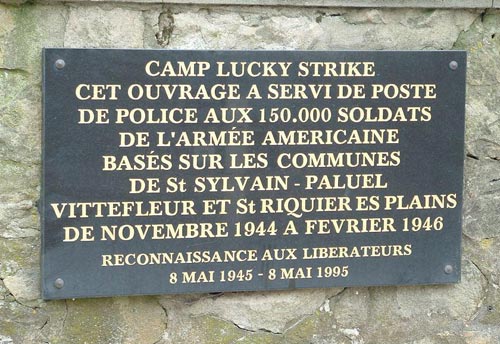 This small memorial is situated at a junction of two French country roads. A small monument but it points to the largest military camp that the Americans had during WWII in Europe, "Camp Lucky Strike."
On September 7, 1944, after the city of Le Havre in Brittany had fallen into allied hands, the allies at last possessed a extra port, apart from Cherbourg. A devastated port however: the town was bombarded to a complete ruin by the Royal Air Force and the Germans had destroyed everything they could. 17 km of quay had nothing left but just one working crane. The Americans energetically snapped the port and Le Havre was the main port for transporting troops for the coming years.
Surrounding the city of Le Havre, the so called "Cigarette" camps were constructed. Big tent camps to provide a first asylum for huge numbers of troops to fight in Europe (staging areas). From there the soldiers were transported to units in Europe. Naming them after cigarette brands was mainly aimed at keeping the locations secret, but the Americans also hoped for a psychological effect because of the familiarity with these names.
"Camp Lucky Strike" was populated by 60,000 to 100,000 Americans and covered an area of 600 hectares. The leadership of the camp was located in the nearby castle of Janville.
After the capitulation of the Germans the camp was used again by the Americans. Gathering soldiers that were to be demobilized and went back to the States, sending other soldiers to new units for the fight in the Far East and providing shelter for recently released prisoners of war. During this phase many German prisoners of war were working in various positions in the camp.