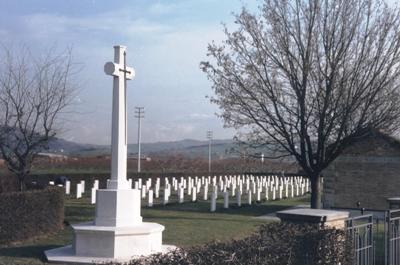 On 3 September 1943 the Allies invaded the Italian mainland, the invasion coinciding with an armistice made with the Italians who then re-entered the war on the Allied side. Following the fall of Rome to the Allies in June 1944, the German retreat became ordered and successive stands were made on a series of defensive lines. In the northern Appenine mountains the last of these, the Gothic Line, was breached by the Allies during the Autumn campaign and the front inched forward as far as Ravenna in the Adratic sector, but with divisions transferred to support the new offensive in France and the Germans dug in to a number of key defensive positions, the advance stalled as winter set in.

Meldola War Cemetery was originally a battlefield cemetery of the 46th Division, into which a few burials were concentrated; they all date from the last week of October and the month of November 1944. Meldola itself was taken on 30 October and in the ensuing month the 46th and 4th Divisions advanced to the Lamone River.