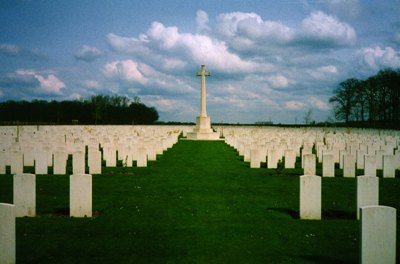 Westvleteren was outside the front held by Commonwealth forces in Belgium during the First World War, but in July 1917, in readiness for the forthcoming offensive, groups of casualty clearing stations were placed at three positions called by the troops Mendinghem, Dozinghem and Bandaghem. The 4th, 47th and 61st Casualty Clearing Stations were posted at Dozinghem and the military cemetery was used by them until early in 1918.

There are now 3,174 Commonwealth burials of the First World War in the cemetery and 65 German war graves from this period. The cemetery also contains 73 Second World War burials dating from the Allied withdrawal to Dunkirk in May 1940.