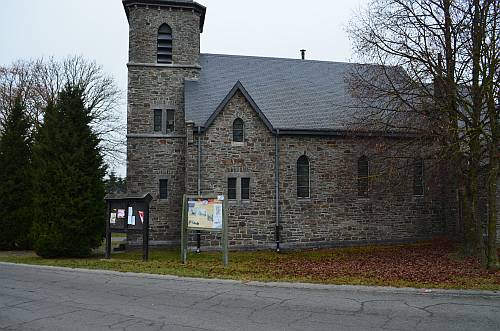 Hemroulle was one of the only villages to remain under American influence during the occupation of Bastogne.

When it started to snow on the plateau of Bastogne on December 22, 1944, Major John D. Hanlon's battalion paratroopers were given sheets by the population to camouflage themselves. After the war, Major Hanlon returns with sheets offered by his hometown, Winchester. He hands them out among the villagers.

The area of ​​Savy and Sans Souci was one of the places where the US military dropped the essential reinforcements for the besieged garrison.

A plaque is dedicated to the American paratroopers of the 463rd Artillery Field Battalion and to the residents of Hemroulle, whose attitude and resistance, on Christmas Day 1944, stopped the German armored vehicles near the village.

Only a single German tank, coming from Champs, manages to reach Hemroulle. The occupiers were captured believing they were already in Bastogne, in the hands of their troops ...

To go to board 15
Continue in the direction of Bastogne and turn right at the traffic lights, towards the city. The Kazerne Sub-lieutenant Heintz is on the left, near the cemetery.