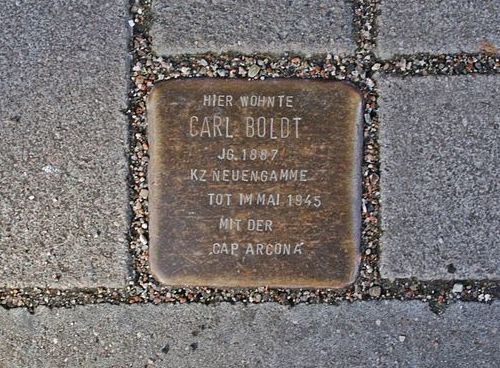 Carl Boldt and Olga Elmers married and had three children: Frieda (b. 1908), Karl (b. 1909), and Emma (b. 1912). He worked as a machinist in the Bergedorf Ironworks for several years. Before WWI he was a member of the social democrat party, and after the war he became a member of the independent social democrats, which merged with the communist party in 1920. From 1927 to 1930 he was a representative in the Bergedorf local parliament.

In 1933 he was arrested and taken to Fuhlsbuettel concentration camp and held there for a few months before being released. He found a job, and in his spare time he sealed fruits and vegetables into cans for preservation. When a laborer came in August 1943 to get some cans sealed, Boldt made some negative remarks about the Nazis, which the laborer reported. The Gestapo arrested Boldt and sent him to Neuengamme, where he operated a switching panel in the brick-making works.

When the Nazis emptied the camp in April 1945 before the arrival of the Allies, thousands of prisoners were put on the ship, the Cap Arcona, which became an overcrowded concentration camp with no food and no drinking water. The Cap Arcona and several other floating concentration camps were hidden in plain sight among other troop ships. With a goal of keeping the Germans from escaping by boat, the British bombed the ships in the harbor. Approximately 7,000 concentration camp prisoners died by fire or drowning, or were shot by Germans on the shore.

Four days later, the Germans signed an unconditional surrender of all German forces to the Allies.