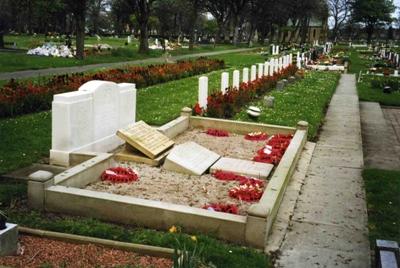 Hebburn Cemetery contains 41 scattered burials of the First World War. Of the 52 Second World War burials, 33 form a war graves group in Section C. Among these graves is the collective grave of 20 sailors who were killed on 9 May 1940 when the destroyer H.M.S."Kelly" was torpedoed whilst in action against German E-boats in the North Sea. Four of these men could not be identified. There is also a memorial to the officers and men who died when the "Kelly" was sunk during the Battle of Crete in 1941.