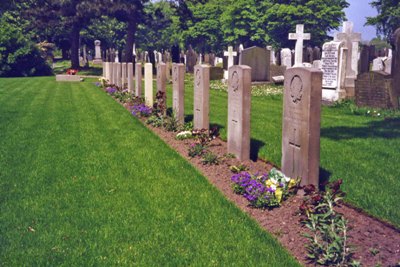 Kirkdale Cemetery in Liverpool contains 386 First World War burials. Of these, more than 100 are Canadian. Of the remainder, 82 are of officers and men of the King's (Liverpool) Regiment. About half of the graves from this period are scattered throughout the cemetery and the rest are contained in two war graves plots, where the names of the dead are recorded on Screen Wall panels. There are also 115 Second World War burials in the cemetery, nine of them in one of the First World War plots, the rest scattered. This cemetery also contains nine war graves of other nationalities. Originally, there were many more, including American and German from the First World War and Belgian from both wars, but these were later removed to other national cemeteries in the United Kingdom or repatriated to their home country.