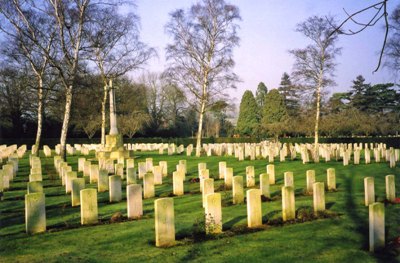 Botley Cemetery in North Hinksey contains 156 burials from the First World War, all in the war graves plot in section I/1. The cemetery was designated a Royal Air Force regional cemetery during the Second World War and was used by RAF stations in Berkshire and neighbouring counties. Practically all of the 516 Second World War burials (one of them unidentified) are in the war graves plot, which was extended from the section used during the First World War. In addition to the Commonwealth war graves, the cemetery contains almost 70 war graves of other nationalities.