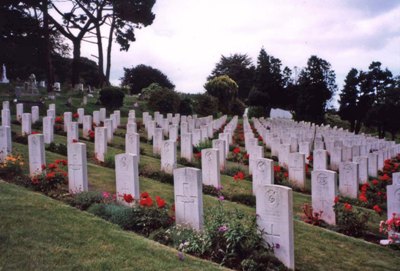 Plymouth was a naval station second only to Portsmouth during the Second World War. Devonport was also an important military station and there was a R.A.F station at Mount Batten, opposite Plymouth. Weston Mill Cemetery in Plymouth contains 398 burials of the First World War, 1 being unidentified. Approximately half are in the naval and military war graves plots, the rest are scattered. Second World War burials in the cemetery number 556, 11 of which are unidentified. Of these, 111 of the earlier graves filled the existing naval and military plots. A further plot was then set aside for service graves and 317 of the burials were made there. The rest of the war graves are scattered. The cemetery also contains 14 non-war service burials and 36 war graves of other nationalities, 25 of them Polish.