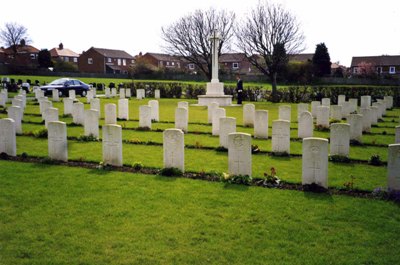 Harton Cemetery in South Shields contains 206 scattered burials of the First World War. Second World War burials number 209, more than 100 of them forming a war graves plot. The plot also contains 21 non-war service burials and one Dutch war grave. The cemetery suffered heavily during air raids on the Tyneside area during the first years of the Second World War. It was severely damaged on several occasions, both by bombs which fell on it and by a landmine which exploded there in April 1941. Another air-raid in October 1942 caused extensive damage to the cemetery.