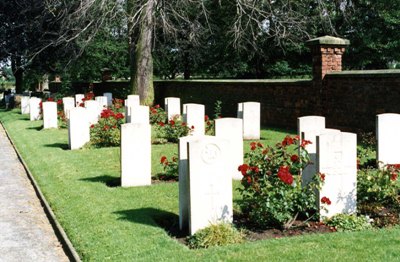 Selby Cemetery contains war graves of both World Wars, the burials of the 1914-1918 War being scattered throughout the cemetery. During the 1939-1945 War, a portion of land was set aside by the local authorities for service war burials. This became the War Graves Plot, the remainder being scattered elsewhere. The high proportion of airmen's graves is accounted for by the number of airfields established in this district during the war, the cemetery having also been used for the burial of airmen from the nearby R.A.F. Station at Burn. It was from Snaith Aerodrome close by that No. 51 R.A.F. Bomber Squadron ("York's Own") carried out its extensive raids over Germany during the last two years of the war, some of the casualties having been buried here. Ten airmen, of whom one could not be identified, who were killed in an accident when a bomb exploded at Snaith R.A.F. Station in June, 1943, are also buried in the cemetery. The cemetery contains 82 war graves. Of these, most are from the Second World War.