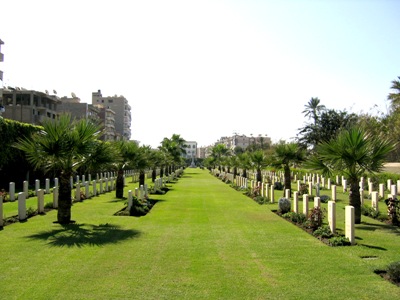 Port Said War Memorial Cemetery was begun in October 1914 and was slightly increased after the Armistice when graves were brought in from other cemeteries. During the Second World War, Port Said was a sector headquarters for the fighter defence of the canal. Most of the burials from this period were made from the hospitals and a transit camp in the area, but later on, some graves were moved in from other cemeteries where permanent maintenance could not be assured. The cemetery now contains 544 Commonwealth burials of the First World War and 111 from the Second World War. There are also 430 war graves of other nationalities and 7 non-war burials.