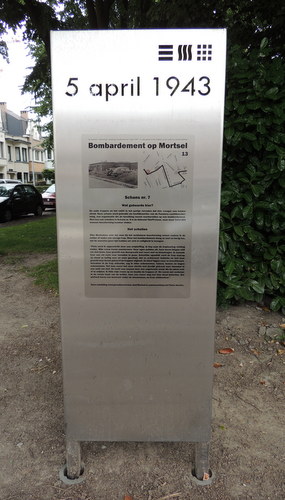 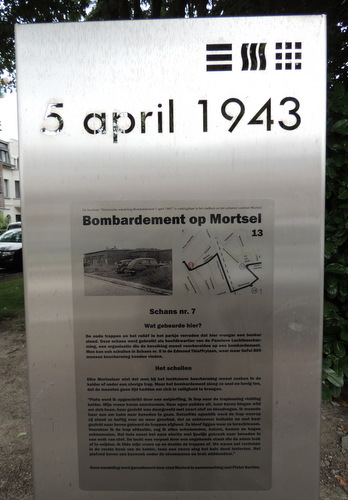 Sconce nr.7
What happened here?
The old stairs and the relief in the park reveal that a bunker used to be here. This redoubt was used as headquarters of the Passive Air Defense, an organization that had to prepare the population for a bombing raid. People could also take shelter in Schans no. 8 in the Edmond Thieffrylaan, where no fewer than 800 people could find protection.

[i Hiding
Every Mortselaar knew that during the air raid alarm they had to look for protection in the cellar or under a sturdy staircase. But the bombing hit so quickly and violently that most did not have time to get to safety.
"Suddenly I was startled by an explosion. I walked to the banister in the basement. My wife came running. Her eyes bulged, her hair hung wildly around her, her face was lined with black dust and blood smears. I urged her to calm down. The very same moment the stairs on which she was standing were shaken so violently that she tumbled backwards and slid down the stairs with her face turned upwards. She lay where she landed. Before I descended the stairs I saw I rocked everything, houses, trees and hedges rocked. The house next to us plunged into a cloud of dust with a frightful creak. The air was spoiled by an unprecedented stench that seemed to cut off my breath. "We were just hiding in the farthest corner of the basement when a heavy blow caused the house to collapse. The ceiling above us collapsed under the rock and broke in the middle."