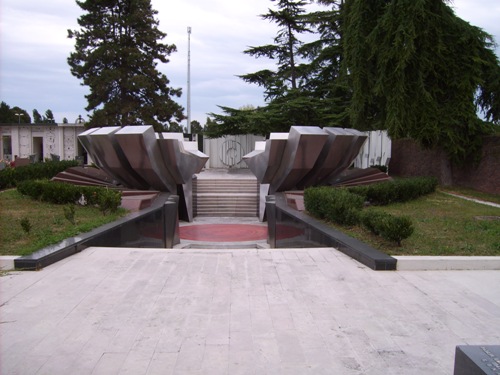 On 23 February 1942, camp Gonars was established. The first transport of 5.343 prisoners (of whom 1.643 children) arrived 2 days later. Many of them were Croats and Slovenians. The total number of internees at Gonars was approximately 7,000. At least 453 persons died in the camp.

On 8 September 1942, the camp was closed after the capitulation of Fascist Italy. Every effort was made to erase any evidence of this black spot of Italian history. The camp building were destroyed, the material used for the construction of a nearby kindergarten and the camp terrain turned into a meadow.

In 1973, the Gonars Memorial was placed in the memory of the victims. The memorial can be found at the cemetery of Gonars. The memorial has the form of a stylised flower, made of stainless steel. The core can be divided into 2 circular crypts with small niches for the urns of 453 camp victims. Apart from the memorial no other evidence of the camp remains.