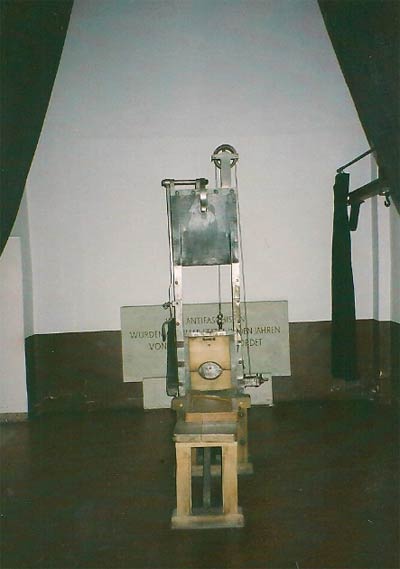 The Nazi's used it from 1933 till 1945, to imprison 'dangerous elements'. The prison population mainly consisted of criminals, political prisoners, draft resisters and POW's. The execution room (see picture) was established in 1940. From August 1940 till April 1945, some 1,722 prisoners were executed here. 652 other prisoners perished due sickness and 6 committed suicide. The prison was liberated on 27 April 1945 by the Red Army.

After the war, the prison was used by the NKVD till 1947 for detention of collaborators and high-ranking members of the 'Russian Liberation Army' (ROA). In 1949/1950, the GDR took over the prison.

The complex today:
Since 1988 a documentation centre and museum is established inside the prison. One of the exhibition rooms is the former execution room with guillotine.