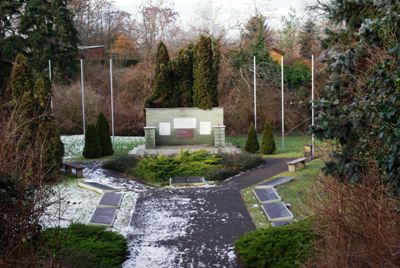 This memorial commemorates the forced labour camp Großbeeren and its victims, include those who are buried here in a mass grave. This camp was set up by the Gestapo. Between September 1942 and April 1945, about 45,000 people were imprisoned. Because of the inhuman treatment of the prisoners, at least 1197 of them died. Among the dead were 340 people from the Soviet Union, 334 from Poland, 182 from France, 99 from Tsjechoslovakia, 80 from The Netherlands 40 from Belgium and 97 from Germany.