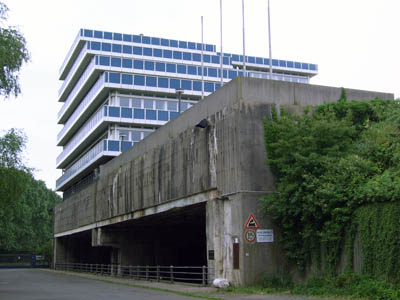 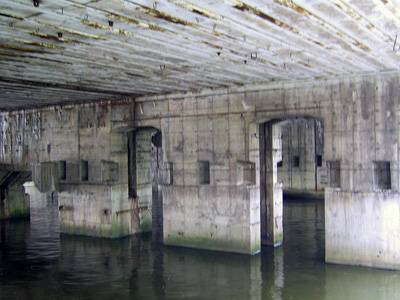 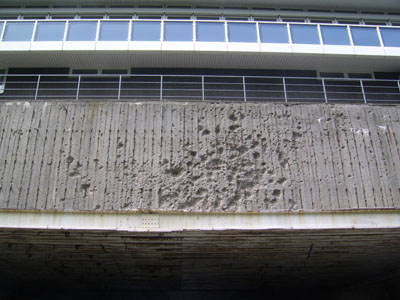 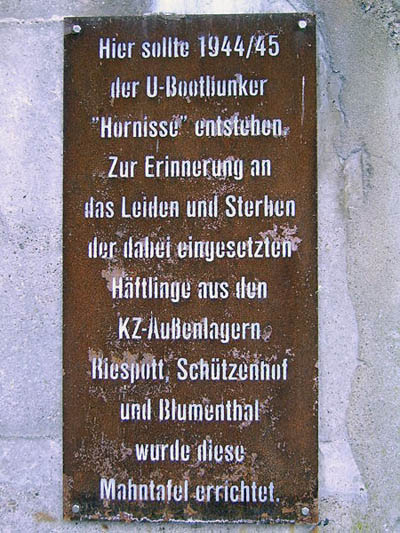 This U-boat bunker is located in Bremen. The bunker was 362m x 68m in size and the roof of the bunker was 4,5m thick.

The construction of the bunker started in March 1944 and was never completed.


The never fully completed bunker was part of the Deschimag AG Weser complex and must be seen in conjunction with the Valentin bunker in Farge. In Hornisse (hornet) sections for the XXI type would be built that would be assembled and finished in Valentin. Hornisse was one of the three planned locations where three sections would be built, the other sections would be manufactured in the Wespe bunker yard in Wilhelmshaven (planned only) and Fink in Hamburg (completed, remains still present).

The bunker would consist of four parts. At the rear a workshop with two floors, then the section where 42 sections would be produced each month, then a repair section for U-Boats and finally a dock and lock.

The simple idea was to block the dock, so that a bomb-free location for the manufacture and repair of U-boats could be made relatively easily. Later, however, it turned out that even the thickest reinforced concrete roofs could not withstand the latest bombs in the Allied arsenal. Like Valentin, Hornisse would have a roof thickness of 4.5 meters, but the Grand slam and Disney bombs penetrated. Most likely, the roof would also be reinforced even more.

Work started in the fall of 1944. Like the Valentin bunker and many other projects in the Third Reich, forced laborers were used for the construction. At Hornisse, concentration camp prisoners were deployed who had to perform heavy labor without proper clothing and aids.

Because Valentin was given priority in the allocation of equipment and raw materials, construction did not progress very well. Furthermore, a bombing in March 1945 damaged cranes, concrete mixers, pumps and pipes and the work was more or less stopped. Only the rear part was ready. After the war, part of the bunker was blown up. An office building was built on the remaining part in 1968/69.