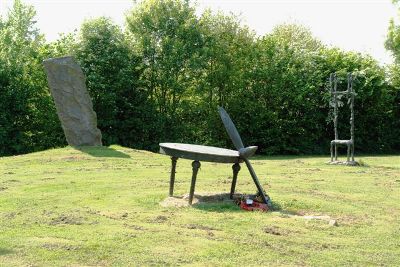 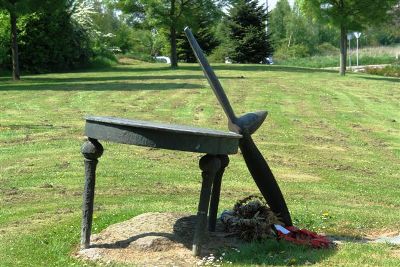 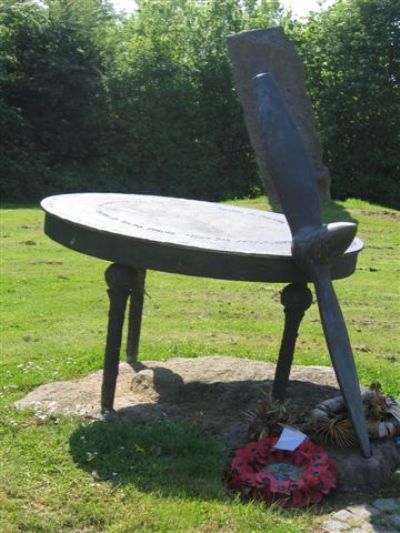 This memorial commemorates Lancaster R-5701 of the 97 Squadron, which crashed on this location on 5 october 1942.

On a bombing raid on Aachen (G) the plane exploded in mid air near Brunssum but was not claimed by the Luftwaffe or the ground forces. The bodies were lying around and only the pilot was not damaged. He fell on a wheat stack and slid down and sat up against the stack. There he was found by air wardens Hendriks and Schrijen from Brunssum. A short while later the German MP arrived and they took over the protection. The next morning they found all the other bodies and laid them together and left them covered up for a few days. Then they were transferred to a Military Cemetery near Venlo. Some houses were damaged but no civilian casualties.

On the way to Aachen they bombed by mistake the town Geleen 20 kilometers from here, killing 80 people and many were wounded. Research showed that a fighter pilot Autentriet and his gunner Adam from Naghtjagd Geschwader 1 Stab 2 claimed to have shot down a Halifax Bomber that night. But that night no Halifax went missing so most likely that it has been the Lancaster R 5701. The aforementioned Halifax in 1943 is another aircraft. That largely fell on German territory. The part of it that fell on the State Mine Hendrik, the gunner John Raw was still in it. He is buried in Maastricht.

The artist / creator of this monument is Marco Jurien from Maastricht.