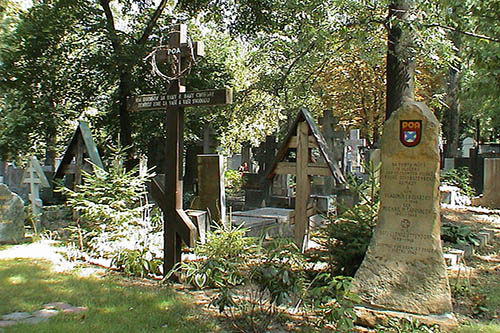 This mass grave on Zidovské cemetery in Prague contains the remains of 187 ROA (Roesskaja Osvoboditelnaja Armija: Russian Liberation Army) soldiers who died during the Prague uprising, 1945. Among them are:
- General Vladimír J.Bojarskij (?-1945)
- General Michail M.Sapovalov (1901-1945)

The ROA was established by Russian officers in German captivity to liberate Russia of the Stalin government and in particular Communism. During the Prague uprising of 1945, the ROA was thrown in battle by the German army to defeat the Czech insurgents. At the most critical moment of the battle, the ROA turned on the Germans and joined the insurgents.The former soviet soldiers soon left the city towards west to escape future Russian captive. Nevertheless they were hand over by the Americans to the Red Army and many ROA soldiers in Russian captive were shot in the woods around Prague. The 'lucky ones' were send straight away to the Gulag camps.