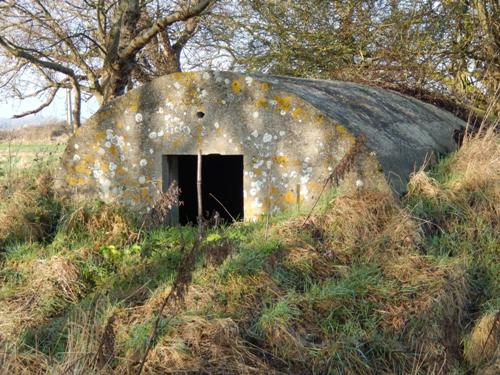 This Stützpunkt was part of the German Atlantic Wall (Atlantikwall).

This Stützpunkt is located in the yard of the farm "Baraque Baude". There are many thin-walled edifices standing, mostly wellblech bunkers, warehouses and a small bunker with observation dome. The four 76.2 mm field guns, model FK 39 (r), were first standing in open emplacements. During the Schartenbauprogram , construction of two types 699 bunkers started, both camouflaged as a barn. One of them has an open emplacement for a Flak on the roof. The secondary armament consisted of two 20mm Flak's. In 1942, the 8 Batterie, Artillerie-Regiment 304, was positioned here, which was replaced by the 4 Batterie, Artillerieregiment Simon of the182. Infanterie-Division. On 1 March 1943, this unit was renamed to 3 Batterie, I Batallion, Artillerieregiment 18, 18. Luftwaffen-Feld-Division.