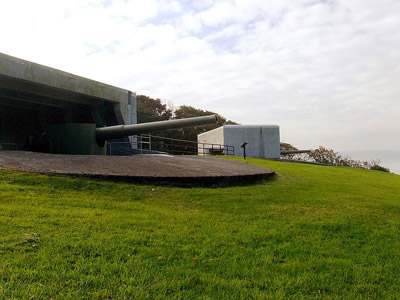 Situated within Crawfordsburn Country Park, on the headland to the east stands a wartime relic, Grey Point Fort, a most interesting and unusual visitor attraction with great surrounding views.
This gun site was built to protect the mouth of the Belfast Lough from enemy invasion and now houses a little military museum. Centrepiece is a 12ft by six inch diameter naval gun which was installed in 1992. It is nearly a century old and was brought from Spike Island in Cork Harbour which also had a defensive fort. Grey Points two guns were sold for scrap in 1957 after the disbanding of the coastal artillery.