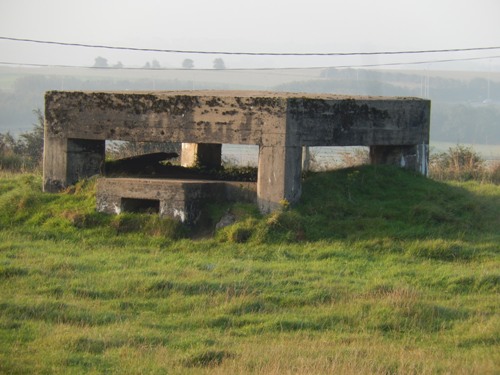 This Stützpunkt was part of the German Atlantic Wall (Atlantikwall).

This strong point, situated in and around the village centre of Ledquent, was part of the Luftwaffe airfield Marquese-West between 1940 and 1943. In the period 1943-1944 it fulfilled the function of headquarters. At first for Pionierbataillon 147 and later alsof or the 1. Abteilung / Artillerieregiment 331.

On the 25th of March 1943 the strong point was provided with the code name "Stützpunkt 188 Schlesien". It was under the command of Luftwaffe Hauptmann Schüler, with Oberleutnant Fonfara as second in command. The occupation force consisted of 153 men: 4 officers, 37 NCOs (non-commissioned officers) and 112 troops.

The strong point was also the headquarters of Pionierbataillon 147, which was, in june 1944, the Divisionsreserve of the 47. Infanteriedivision, whose unit probably was present before april 1944.

The strong point is unique in the number of drawings that are still present in the bunkers today.