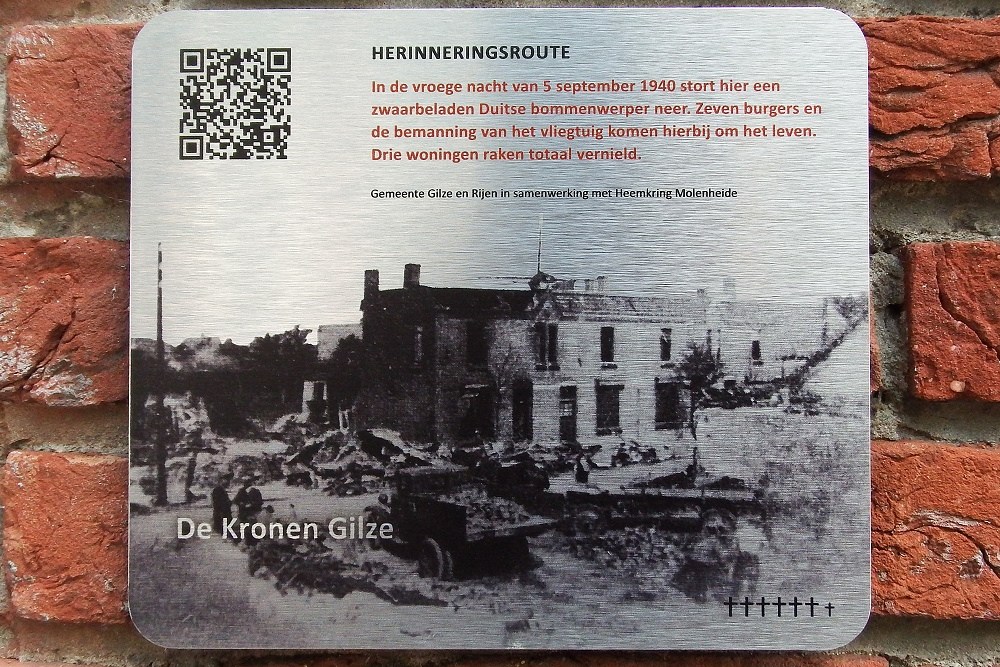 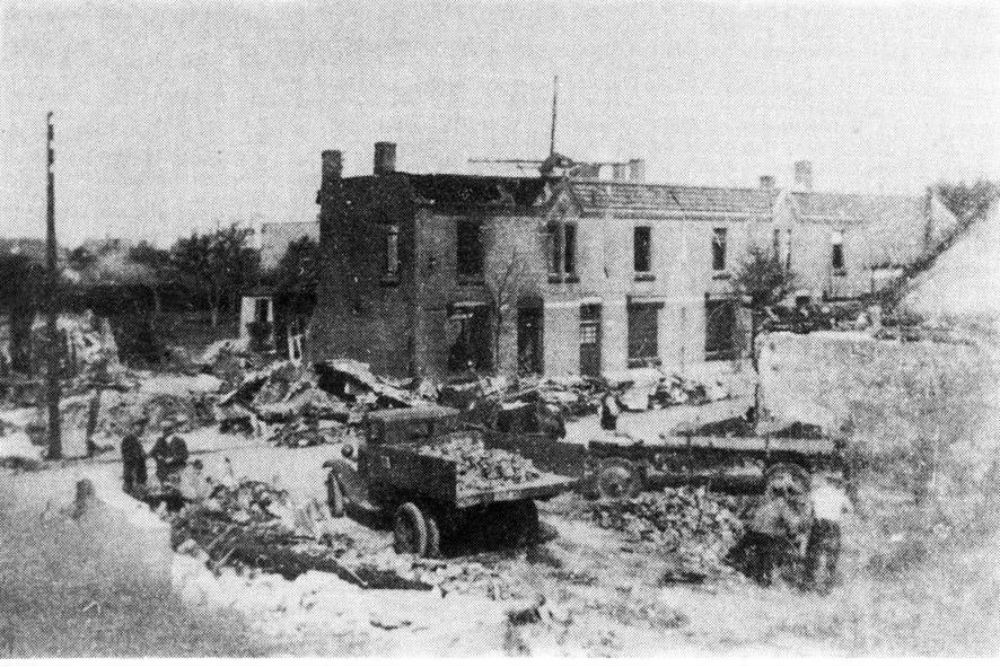 Shortly after midnight, on Wednesday, September 4, 1940, a German bomber of the type He 111 IH + FP crashed in the Nieuwstraat in Gilze. The bomber - on the way to England - was loaded with kerosene and bombs. At that time, most people in Gilze were already enjoying their night's sleep, completely ignorant of what was happening.

The van Wezel family in the Nieuwstraat was also asleep and the neighbors, the Vermeulen family in hotel De Kronen, were making the final preparations to end the day. In the kitchen, mother Vermeulen and son Kees had tidied up the last things and they talked a bit with two regulars, who drank their last glass here.
Then all hell broke loose. A howling sound followed by a thunderous blow. The ripping sound of breaking metal and wood, followed by a huge blaze. Beams, roof tiles, stones and pieces of metal smashed in with ferocious force through the windows of De Kronen and huge holes were punched in the walls. For a moment there was a shock of terror among the residents who were awake. Then a scorching heat came at them and there was that one thought: "Get out!".

The situation at the scene of the accident was indescribable. The German plane had penetrated the top floor of Willem van Wezel's house, dragging all that was inside. Roof tiles, trusses, furniture, walls fell on the street.

The people who were in their beds were also dragged and left on the street between the rubble and the burning gasoline. Pieces of airplane, debris and beams, but especially burning petrol, spread to the hotel across the street and set it ablaze. Fortunately, all residents, albeit covered in burns, managed to leave the building. They too could save their lives by jumping out of windows and holes in the walls. The place of the disaster turned into a real hell. The sound of the detonating ammunition and the bellowing flames echoed the sound of the airport's still-starting aircraft. On top of that the terrifying alarm of the ringing church bells. Because the electric power also went out in the accident, the sirens did not work. Then followed three dull thuds from the detonating bombs, which destroyed windows and roof tiles in the far surroundings.

Only the next morning it became clear how big the damage was. The street was filled with rubble and glass. Pieces of the plane in between, scattered everywhere. Of three houses and a shed, only the scorched, burnt remains remained. In between, with scorched and sweaty faces, the firefighters and rescue crews moved, weary under black helmets, eyes burning with smoke and heat. For hours they had to work hard to save what could be saved. It was only now that the crew of the crashed aircraft could be salvaged and soon the charred remains of the four pilots were removed from under the rubble. When the German authorities started clearing the rubble at the end of the afternoon, the village of Gilze was able to draw up the sad balance. A balance that cast a shadow of grimness over this otherwise friendly village. In the hearts of the people, the night's fear and terror gave way to a feeling of deep defeat and helpless anger. The sad list of the victims gave every reason.

Father Jan Vermeulen was still seriously injured in the hospital at the time. Later he died.