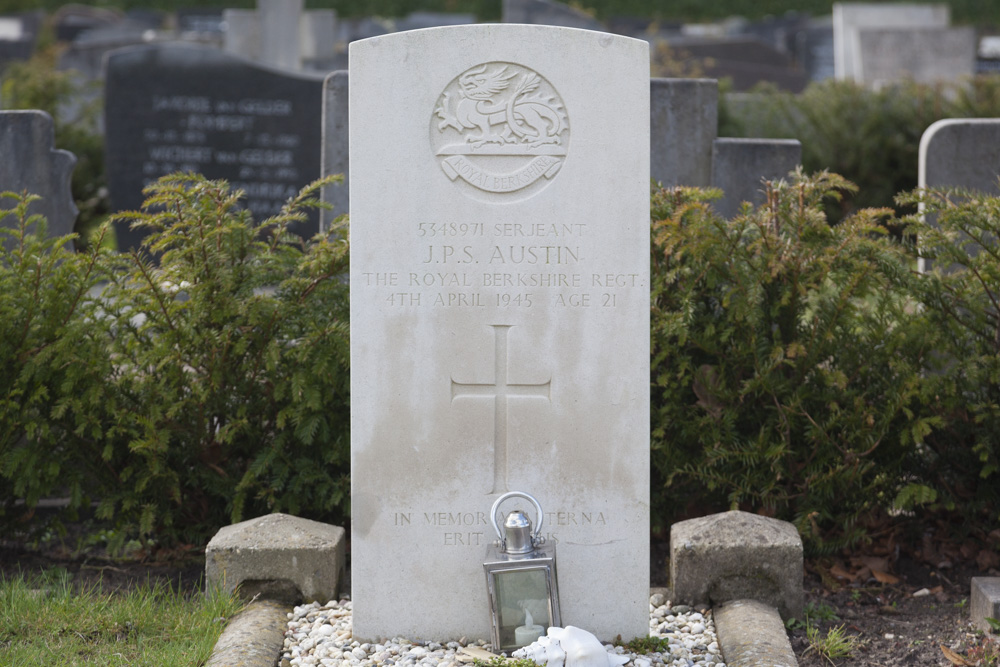 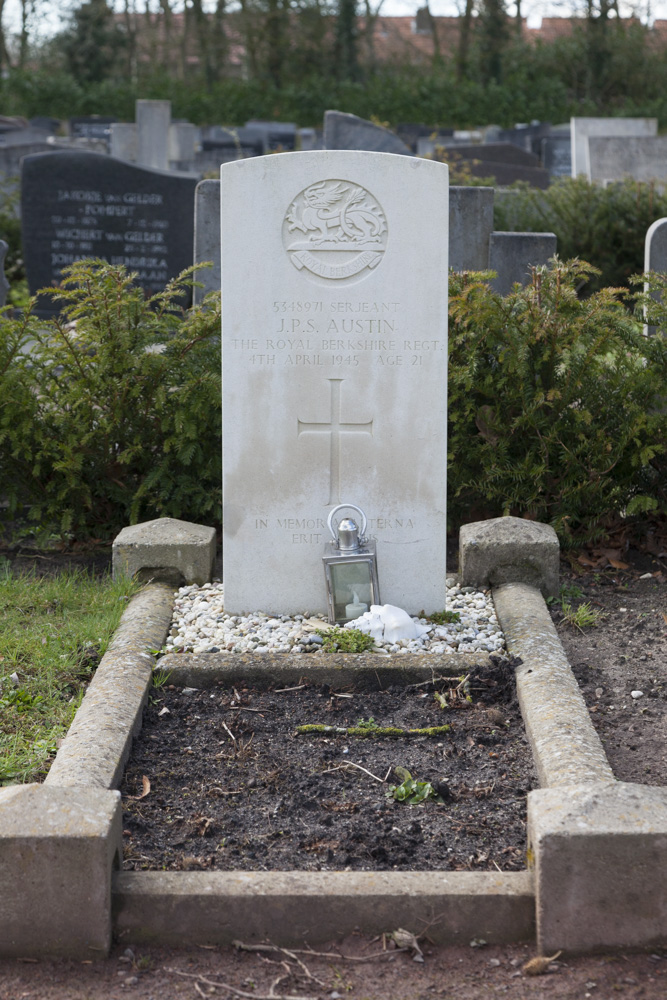 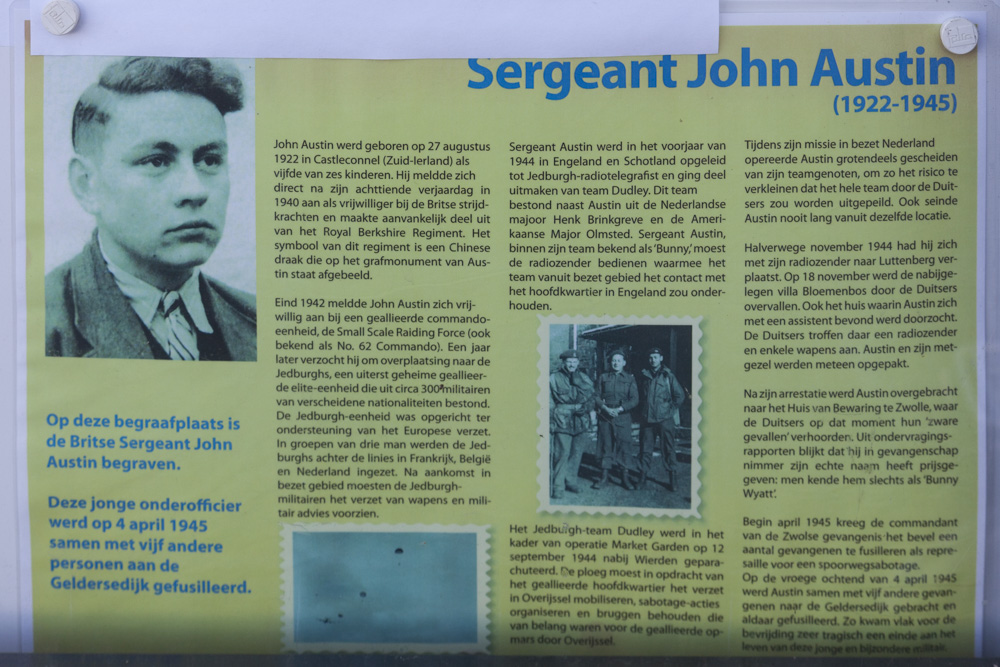 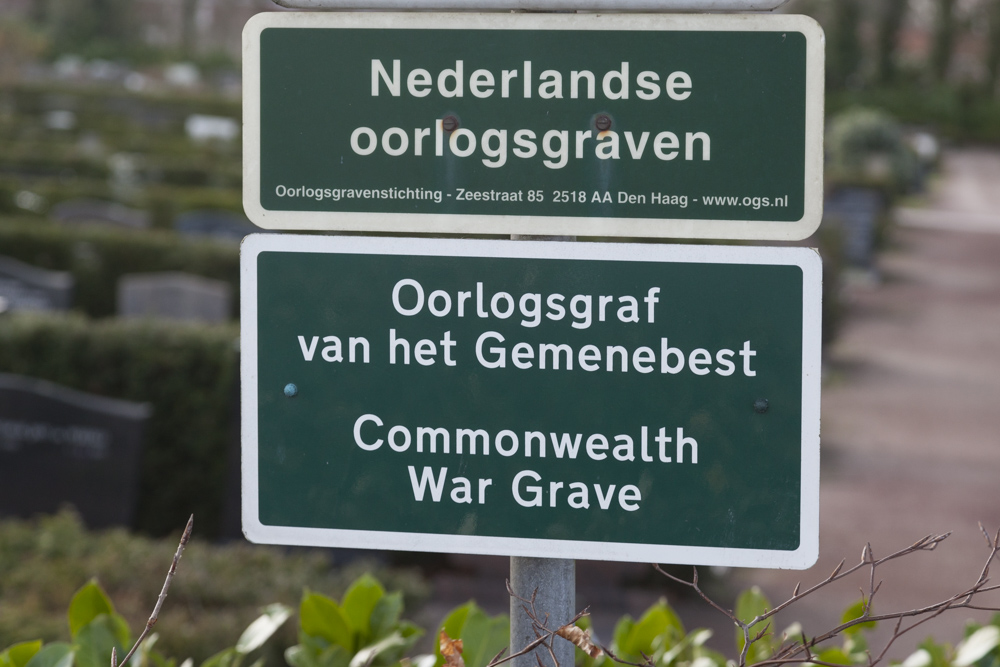 The British Serjeant John Austin is buried in this cemetery (plot 2, grave 153). This young non-commissioned officer was executed on April 4, 1945, together with five other persons at the Geldersedijk. After that he was buried as the only allied soldier in the general cemetery in Hattem, where a memorial plaque is placed near his grave.

Background John Austin (from the plaque)
John Austin was born on August 27, 1922 in Castleconnel (Southern Ireland) as the fifth of six children. He volunteered in the British Armed Forces immediately after his eighteenth birthday in 1940 and was initially part of the Royal Berkshire Regiment. The symbol of this regiment is a Chinese dragon depicted on the Austin funerary monument.

At the end of 1942, John Austin volunteered to join an Allied commando unit, the Small Scale Raiding Force (also known as No. 62 Commando). A year later, he requested a transfer to the Jedburghs, a top secret Allied elite unit made up of approximately 300 soldiers of various nationalities. The Jedburgh unit was established to support the European resistance. The Jedburghs were deployed behind the lines in France, Belgium and the Netherlands in groups of three men. After arriving in occupied territory, the Jedburgh soldiers had to provide the resistance with weapons and military advice.

Sergeant Austin was trained as a Jedburgh radio operator in England and Scotland in the spring of 1944 and joined Team Dudley. In addition to Austin, this team consisted of the Dutch Major Henk Brinkgreve and the American Major Olmsted. Sergeant Austin, known within his team as "Bunny," was to operate the radio transmitter that would keep the team in contact with headquarters in England from occupied territory. The Jedburgh team Dudley was parachuted near Wierden on 12 September 1944 as part of Operation Market Garden. The team was ordered by the Allied headquarters to mobilize the resistance in Overijssel, organize sabotage actions and maintain bridges that were important for the Allied advance through Overijssel.

During his mission in the occupied Netherlands, Austin operated largely separately from his teammates, in order to reduce the risk that the entire team would be gauged by the Germans. Also, Austin never transmitted long from the same location. In mid-November 1944 he had moved with his radio transmitter to Luttenberg. On November 18, the nearby villa Bloemenbos was raided by the Germans. The house in which Austin was located with an assistant was also searched.
The Germans found a radio transmitter and some weapons there. Austin and his companion were immediately arrested. After his arrest, Austin was transferred to the House of Detention in Zwolle, where the Germans were interrogating their "serious cases" at that time. Interrogation reports show that he never revealed his real name in captivity: he was known only as "Bunny Wyatt". At the beginning of April 1945, the commander of the Zwolle prison was ordered to shoot a number of prisoners in reprisal for a railway sabotage.

Early in the morning of April 4, 1945, Austin, along with five other prisoners, was taken to the Geldersedijk and there executed. Just before the liberation, the life of this young and special soldier came to a very tragic end.