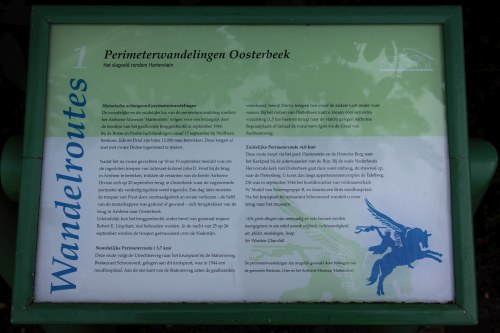 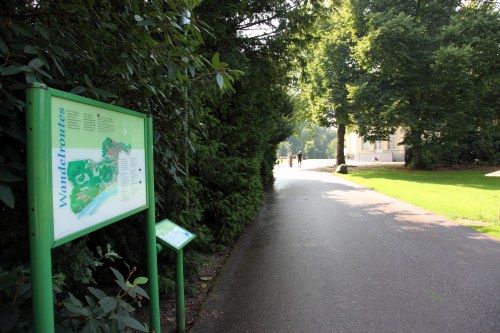 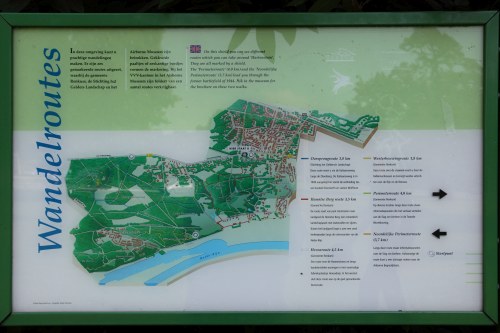 The text on the information panel is:
Perimeter walks Oosterbeek
The Battlegrounds around Hartenstein

Historic background of the perimeter walks
The northern and southern loop of the perimeter walks around the Airborne museum 'Hartenstein' mainly follow an important part of the frontline of the allied bridgehead in September 1944.
During the British and Polish airborne landings from the 17 September at Wolfheze, Renkum, Ede and Driel nearly 12.000 men were involved. They soon ran into heavy German opposition.

After having failed to reach the surrounded troops of Lt Col John D. Frost at the bridge in Arnhem following the heavy fighting on the 18 and 19 September, on 20 September the remaining men of the First Airborne Division withdrew back to Oosterbeek where the so called perimeter was established as a line of defense. A day later Frost's troops - of whom half had been killed or were wounded - had to withdraw from the bridge in Arnhem to Oosterbeek due to lack of supplies and heavy casualties.
Eventually the bridgehead, under command of General-Major Robert E. Urquart, could not be held. During the night of 25 to 26 September the troops were evacuated across the Lower Rhine.

Northern Perimeter Route (3.7 km)
This route follows the Utrechtseweg to the crossroads at the Stationsweg. In 1944 Restaurant Schoonoord, situated at this crossroads, was used as a field hospital. The allies had taken cover on one side of the Stationsweg, while they were attacked by the German troops from the opposite side of the road. At the Oosterbeek train station you may extend the walk (1.5 km back and forth) to the nearby Airborne Cemetry or you may continue your route along the Graaf van Rechterenweg.

Southern Perimeter Route (4.0 km)
This route runs through the Hartenstein park and over the Hemelse Berg to the Kerkpad at the flood plains of the Rhine. At the old Dutch Reformed church of Oosterbeek the route continues up the Pietersberg, along the lateral moraine. You will pass appartment building the Tafelberg. In September 1944 this was the headquarters of Field Marshall W. Model of Heeresgruppe B and after that it was used a British field hospital. Via the crossroads at restaurant Schoonoord you can walk back to the museum.

"All things that are great are easy to understand and many can be defined in these words: freedom, justice, honor, duty, mercy and hope."
Sir Winston Churchill

The perimeter walks have been made possible thanks to contributions by the Municipality of Renkum, Citer and the Airborne Museum 'Hartenstein'.