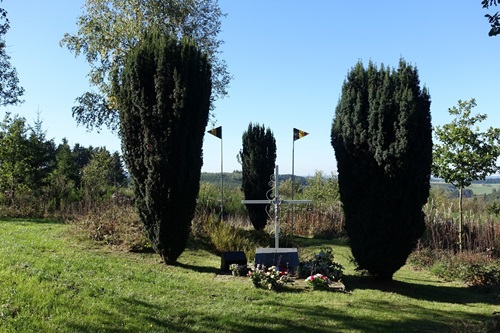 "On December 16th 1944, the German army began its 'last chance' offensive in the Ardennes. The sonderkommandos, a special Gestapo unit whose main aim was to hunt out and eliminate members of the resistance, followed in the wake of the fighting forces. On their return to Houffalize, the Germans carried out searches and succeeded in obtaining a list naming M.N.B. (Mouvement National Belge) resistants. On Friday 22nd December the tragedy, which was to end here, began.

On December 22nd 1944, the German army raided the homes of several residents of Nadrin. They arrested Eudore Weinquin, Emile Remy and Léon Dethor and took them to the Old Inn, in Houffalize. There they joined Sylvain Martin, another member of the M.N.B. arrested in Wilbrin. The following day, on December 23rd, they were all interrogated at the town hall where they were to be joined by Antoine Bollet and Jean Nadin from Houffalize, who had also been arrested. Some of the men were severely beaten.

After their interrogation, the prisoners were brought here. Emile Remy tried to escape but was shot on the spot. In turn, Jean Nadin, Sylvain Martin and Antoine Bollet were summarily executed. When it came to Eudore Weinquin's turn, the German soldier pulled the trigger but the shot didn't fire. Eudore took the opportunity to run, under a hail of bullets, one of which fractured his jaw. Barefoot, he managed to escape through the snow-covered countryside. At around midnight, lost and with frostbitten feet, he arrived in Engreux, where his wounds were treated. Léon Dethor, for his part, was executed after Eudore Weinquin's escape. The next day, Armand Bastin and Alfred Huberty, were arrested in Wilbrin. They were interrogated and the executed in this same place.

The sad news of the massacre was reported by Eudore Weinquin. On February 2nd 1945, an investigator from the U.S. army, visited the site, accompanied by two residents of Nadrin. After clearing away snow and earth which covered the excavation, he discovered the bodies of the five men shot on December 23rd. They had all been shot at point blank range, with one shot to the back of the neck. The bodies of Armand Bastin and Alfred Huberty were only exhumed on April 23rd 1945. Their prolonged absence led to the belief that they had been executed in the Houffalize area. After many weeks of fruitless searching, they were finally discovered only a few metres from their unfortunate companions."