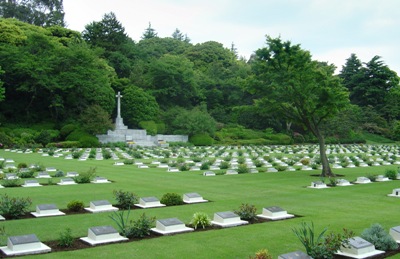 This war cemetery contains 1,555 Commonwealth war graves from the Second World War, including 53 unidentified graves and a small number of special memorials to casualties known to be buried in the cemetery, but whose graves could not be precisely located. There is also one First World War burial and a Dutch war grave.
The graves are of Commonwealth servicemen who died in Japan as prisoners of war.

The cemetery is separated in four main parts: the United Kingdom section, the Australian section, the Canadian and New Zealand section and the Indian Forces 1939-1945 section.

The cemetery is also used for graves for post-war-graves (in a separate section), including those for 10 Australian casualties of the Korean War.